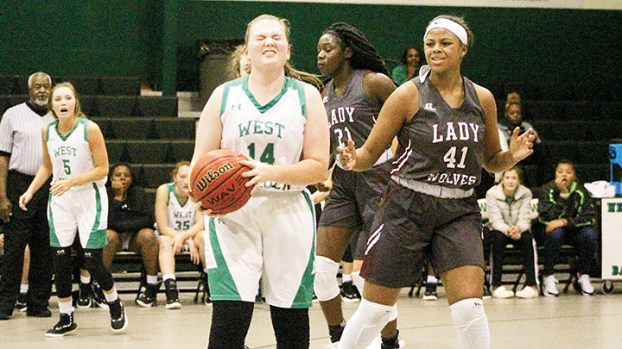 Photo by Cliff Furr West Lincoln senior guard Elizabeth Stogner reacts after turning the ball over against Puckett. On Friday night Stogner was all smiles as she scored 10 first quarter points including hitting two 3-pointers in a 65-28 win over Wesson.

The Wesson Cobras and West Lincoln Bears met for the second time this basketball season on Friday night, this time at Jack Case Gymnasium on the campus of West Lincoln.

And just as it was in their first matchup, it was the Lady Bears taking the opener and the Cobras winning the boys’ game.

The veteran Lady Bears (4-2) defeated Wesson 65-28 on their home court behind a game-high 20-point effort from senior guard Skylar Hall. Hall knocked down three first-half three-pointers, as the Lady Bears jumped up 23-9 after the first quarter. Senior Megan Gerald added 18 points. Elizabeth Stogner was also hot to start the game for West Lincoln, as she scored all 10 of her points in the first quarter.

Wesson took a 74-69 victory in the boys’ game, but West Lincoln coach Brooks Smith had said he wanted to see a better effort out of his Bears than in the first time the two teams met. In that contest, the Bears had only one practice under their belt and were rocked 86-57 by the hot-shooting Cobras on their home court.

This time, Wesson only led by three at halftime, 39-36. The Cobras got 32 points from senior guard J.D. Allen, and West Lincoln got 32 points of their own from junior forward Karlton Byrd. Byrd thrilled the home crowd with four first-quarter three-pointers. Kenner Bizot chipped in 18 points for Wesson and Anthony Hughes scored 15 for the Bears.

Wesson is off until they travel to North Pike on Friday.

The Copiah-Lincoln Community College Wolves snuck by the Southern Arkansas University Tech Rockets 91-87 Thursday in a game that was... read more