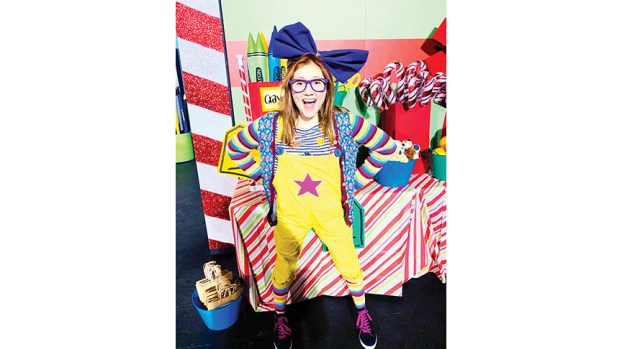 Photo submitted Sierra Wessman stars as the lead in “Junie B. in ‘Jingle Bells, Batman Smells’” which opens Friday for a two-weekend run at Brookhaven Little Theatre.

The pages of a popular children’s book will come alive on the stage of The Haven this weekend as Junie B. Jones arrives in Brookhaven.

“Junie B. in ‘Jingle Bells, Batman Smells’” is the tale of the quirky and spirited first-grader, played by Sierra Wessman of Crystal Springs, who is over the moon about the upcoming holiday singalong and secret Santa gift exchange at her school. But when Junie B. draws her nemesis’ name, the spirit of peace and goodwill will be tested.

This Brookhaven Little Theatre Christmas production marks the directional debut of Jesse Freeman, who does double duty as Mr. Toot. Freeman received the 2018 Haven Award for Best Supporting Actor for his role as Mr. Smee in “Peter Pan.” He also starred as Elmer in “Newsies” and Mr. Macy in “Miracle on 34th Street.”

“Jesse has been in numerous productions at The Haven and had recently shown an interest in directing,” said BLT Executive Director Emily Waterloo. “We use a team approach to every production to provide the support and experience needed to allow a young adult like Jesse to gain directing experience. Having a community theater like ours not only allows people of all ages to perform but is an ideal environment to gain skills in other areas such as directing, set design, costuming, technical directing and hair and makeup.”

More than 1,500 students on field trips will see the production in five weekday performances.

“We have really seen a huge interest in school groups bringing children in to see live theater. Our motivation and inspiration to do this show was to somehow combine celebrating literacy with live theater,” said Waterloo, who also serves as BLT’s artistic director.

The cast of teenagers and adults are mostly all veterans to the Haven stage.

“It’s a group that took the script and memorized it quickly,” she said. “They’ve been working together five or six weeks and just like every other show, they’ve become a family and worked together to create this hilarious play.”

Waterloo said BLT’s biggest mission is to create a place where families can enjoy theater, whether it’s behind the scenes or in the audience. “Junie B. in ‘Jingle Bells, Batman Smells’” accomplishes that.

“This was absolutely the perfect show to do that and to increase the number of kids and schools we can reach for the arts,” she said.

Also coming up at The Haven is “Mozart by Candlelight” which features the Mississippi Symphony Orchestra. The show is Jan. 11 at 7:30 p.m. Tickets are $30 or discounted to $20 for season pass holders.

AKA ball to carry on member’s legacy