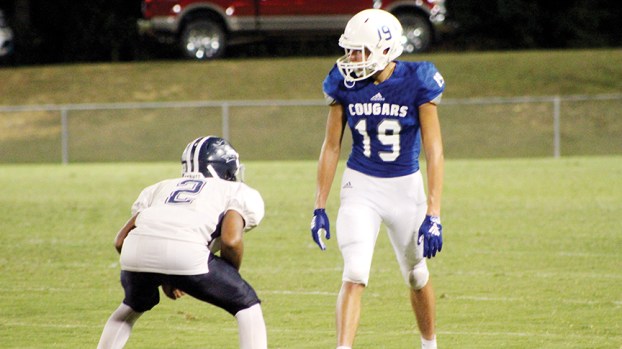 Photo by Cliff Furr Brookhaven Academy senior wide receiver Cade Brown has been named The Daily Leader All-Area Most Valuable Player. Brown accounted for 21 touchdowns in 2018 as the Cougars went 9-3 and lost in the MAIS AA semifinals.

Brookhaven Academy won nine games this season and lost in the MAIS AA state semifinals. The program has built itself back up from the low point of two consecutive winless seasons in 2015-2016.

A huge part of the huge year for the Cougars was the play of senior wide receiver Cade Brown. For his stellar play in the 2018 season Brown has been named The Daily Leader All-Area Most Valuable Player.

Kickoffs were another area in which Brown excelled as a senior. He returned four kickoffs for touchdowns, including three in one half at Ben’s Ford Christian. In limited defensive snaps Brown also picked off two passes and blocked a punt.

“Cade just gave our team so much confidence,” said Brookhaven Academy coach Ron Rushing. “Our kids knew that when we were running something to get him the ball he was a threat to score every time he touched it.”

The ability of Brown to bust big plays in special teams ended up being a boon to BA in the battle for field position.

“We’d put him deep and people started kicking it short to try and keep it out of his hands,” said Rushing.

What Brown does well is use his athletic ability to make plays on the ball. He’s fast, but he’s not a speed-burning outside receiver. At 6-foot-2, 170 pounds, he’s long-limbed and has been blessed with great leaping ability. That’s a big part of the formula for his success.

“He high-points the ball better than anyone I’ve ever coached,” said Rushing. “He’s physical and 90 percent of the time if a ball is 50-50 between him and the defensive back, Cade is going to make the catch.”

Against Centreville Academy in the biggest game of the year, Brown was his best. He caught 17 passes for 242 yards and three touchdowns in a 23-22 win. That game was a microcosm of what makes Brown great. BA quarterback Dawson Flowers kept throwing the ball up to Brown time after time, and Brown kept coming down with the ball over the Centreville defenders.

“Cade is a competitor,” said Rushing. “He wants to catch every ball thrown his way, score on every catch, and run every kick back. He was huge for us all season.”

The dynamic duo of Sevante Quinn and John Hilbert of Brookhaven High will cap their high school careers on Saturday... read more