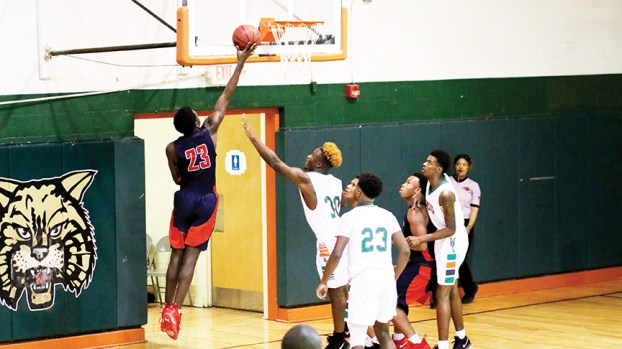 Photo by Becky Green BHS senior forward Lafollette Bogan lays up a basket against Wilkinson County on Friday night in Woodville. Brookhaven High travels to Tylertown tonight for a varsity double header against the Chiefs.

Here is a roundup of how local high school basketball teams faired over the weekend.

The Panthers (8-2) and Lady Panthers (10-1) predictably had no problem with Wilkinson County on Friday as they cruised in Woodville. The Lady Panthers won 48-23 over the Lady Wildcats and the boys exploded for a 95-62 win.

On Saturday the Lady Panthers played at Pearl High school in their annual Coaches vs. Cancer classic and suffered their first defeat of the season as they lost 58-54 to 6A Meridian.

“We have up too many second chance points, but even with foul trouble and turnovers, we were still in a position to win the game,” said Lady Panther head coach Preston Wilson. “Losing this game will help us regain our focus.”

Brookhaven is back in action tonight as they travel to Tylertown to face the Chiefs.

Both Brookhaven Academy teams moved to 2-0 in district with a Friday night sweep of Newton Academy.

The BA girls (7-3) were led by Jana Case with 16 points and eight rebounds in a 46-31 win. The Lady Cougar lead was only three at halftime before a 17-6 run in the third quarter put Newton away. Macy Grace Smith added nine points for BA and Anne Brantley Warren scored six points for the Lady Cougars.

In the boys’ game, teams were tied at 36 after three quarters before a big fourth quarter surge led the Cougars (9-1) to a 57-47 win. Dawson Flowers scored 21 points and grabbed 13 rebounds to lead BA. Cade Brown chipped in 13 points, and Britton Nelson scored nine points for BA.

On Thursday night the Lady Cougars dropped their first home game of the season, 56-44 to Centreville. They BA boys rolled the visiting Tigers, 71-29.

BA next plays on Friday at Adams County Christian School in Natchez. They also travel to Parklane on Saturday.

In the win over North Pike the Cobra defense held North Pike standout Alijah Martin to six points. He came in averaging 25.5 points per contest.

“We played well defensively and frustrated them because they look to him for all of their offense,” said coach Rusty Newman. “We took him out of it early and executed on both ends.”

In the girls’ game the Lady Jaguars defeated Wesson 48-23.