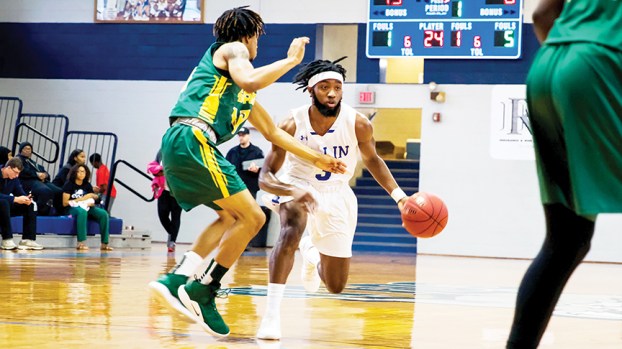 Photo by Co-Lin Sports Information Co-Lin guard Damarius Brooks looks to probe the Delgado defense. A sophomore and Brookhaven High alum, Brooks was recently named MACJC Player of the Week. Brooks is averaging a team high 16.9 points per game for the 7-2 Wolves.

BHS alum Brooks is MACJC Player of the Week

Brooks poured in a career-high 36 points against Mississippi Delta after he went 12-of-17 from the floor and 8-of-9 from beyond the arc. Brooks also brought down six rebounds in that game. The sophomore from Brookhaven backed that performance up with a 20-point game against Southern Arkansas University Tech where he was 7-of-10 from the floor. He also finished the week going 100 percent, 8-of-8 from the free throw stripe.

“I just put it in God’s hands and played great with my teammates,” said Brooks. “The award is truly a blessing and I thank God for it.”

Brookhaven Bass Club hosted its banquet recently for the end of the 2018 year at Cracker Barrel in Brookhaven. First... read more