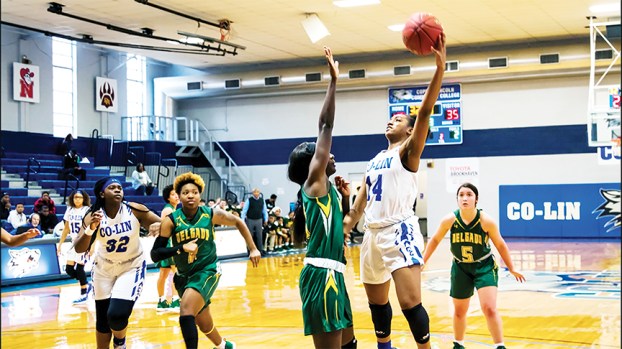 Lady Wolves move to 8-1 with win

The Copiah-Lincoln Community College Lady Wolves move to 8-1 on the year with a 68-50 win over Delgado this weekend to close out the first semester of the 2018-2019 season. The win over Delgado is the 12 victory for Co-Lin against the program over the last five years. The Lady Wolves are back in action Jan. 7 as Co-Lin host Southern Arkansas University Tech in Mullen Gymnasium at 5 p.m.

The Lady Dolphins led 2-0 in the first 13 seconds of the game, but back-to-back layups from Camryn Davis and Sha’Quandra Carter put the Lady Wolves on top 4-2. Co-Lin would not give up that lead for the remainder of the contest. A 12-2 run in the first quarter helped the Lady Wolves stretch that lead to 10 points, 16-6 with just 2:36 remaining in the opening quarter.

The teams traded baskets for most of the second quarter as the action was back and forth. Co-Lin took a nine-point, 31-22, lead into the locker room at half in the low scoring affair.

The Lady Wolves quickly pulled away to a double-digit lead early in the third quarter and held on to it for the rest of the game. A 10-2 run early in the fourth gave Co-Lin a 20-point advantage late in the forth and secured the win.

Camryn Davis led Co-Lin with her first career double-double. The freshman poured in 21 points and brought down a team-high 11 rebounds. T’Kyra Hicks added 11 points as she went 3-of-5 from three-point range. Darien Tubby had a strong outing with 10 assists on the day, her second game with double-digit assists.

A strong first half helped lift the Wolves to a 91-82 victory over the Delgado Dolphins this past weekend. The... read more