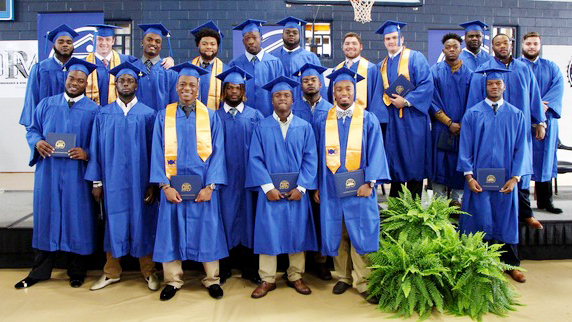 Photo by Co-Lin Sports Information Pictured are 20 of the 27 student-athletes who graduated in the December 2018 class of Copiah-Lincoln Community College. Signing day for graduates is Dec. 19.

The Copiah-Lincoln Community College football program has been a leader in classroom success for years, and in 2018 the Wolf Pack continued that storied tradition by graduating 27 student-athletes. The class, one of Co-Lin’s largest, was 10-9 during their time with the program and helped lead the Wolves to the 2018 MACJC playoffs, the first trip for the school in four years.

Several players intend to sign with four-year programs later in the month to continue their football careers. December graduation for community college football players places them in an excellent position to excel at the next level. Practicing in the spring and becoming acclimated to the college during the off-season is very desirable to four-year coaching staffs.

“We always talk about making our players marketable and putting them in the best position,” said head coach Glenn Davis. “Our players getting to enroll in these programs in January puts them in a great place.”

Co-Lin has built an atmosphere of success around student-athletes in providing opportunities on the field and in the classroom. The Wolves have now graduated nearly 60 players in just the last three years in December.

“Our graduation rate and success in the classroom is an example of the support that our program gets from the faculty, support staff, and administration of this college,” said Davis. “This kind of year-in, year-out success would not be possible without them.”

Signing day for community college December graduates is set for Dec. 19. Several of the Wolves graduating class look to ink with four-year programs to continue their careers.

The Loyd Star Lady Hornets (6-6) looked like a team that is growing in comfort level and scheme on Tuesday... read more