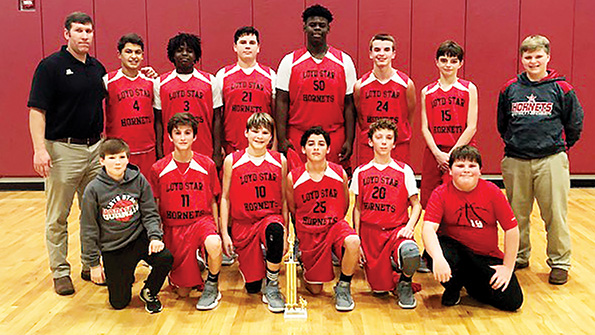 The Loyd Star Hornets captured the Lincoln County Junior High Boys Tournament on Thursday night at Enterprise with a win 49-12 over the homestanding Yellow Jackets in the championship game. In the consolation game, the Bogue Chitto Bobcats squeezed past the West Lincoln Bears 24-22.

The Hornets (9-1) used turnovers and rebounds to build their big lead over Enterprise.

“I think the boys came out and were excited to play for a championship this year,” said Loyd Star coach Seth Britt. “The boys knew what they needed to do.”

“I was very proud of both our teams that made it to the finals,” Enterprise coach Shane Adams said. “Getting to play for the junior high championship is a big deal and I’m proud of them. I thought they played hard against good teams.”

West Lincoln led 7-4 after one quarter and 14-10 at halftime. After three quarters Bogue Chitto had cut the Bears’ lead to 17-16, and the Bobcats came out on top after a 7-6 final quarter.

KDMC honors athletes at Player of the Week luncheon