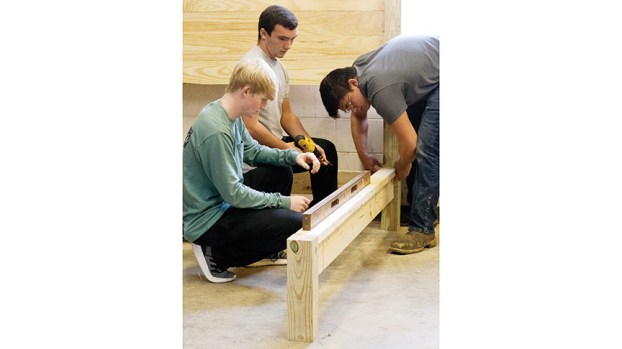 Photo by Adam Northam Enterprise juniors Cameron Thames (from left), Brodie Harris and Zack DeLaughter fasten up the rails to a bed they’re building in their ag/mechanics class for a foster child.

Zack DeLaughter dropped the board on the saw horses and pulled the tape on down the length of the pine. At 75 inches, he made a quick mark, scooted a speed square over the notch and dragged a pencil across the board twice to mark the distance.

Brodie Harris strapped on his safety glasses and lined up the skill saw on the double lead line. With a squeeze of the trigger and a gentle push, the DeWalt ate through the board in a spray of fine yellow dust. The cut wood passed next to Cameron Thames, who dropped it in place to cap the left-side frame rail of the bed they were building. He lined it up, just right, and squeezed it tight with both hands.

“Right there,” he said, indicating with a nod where he wanted Harris to pop in a screw and join up the board.

After 50 minutes of class in the ag/mechanics shop Friday, the three Enterprise Attendance Center juniors finished out the frame for the full-size bed. They had spent Monday and Tuesday measuring and marking, Wednesday cutting and Thursday building the headboard.

Next week, the last before the holiday break, they’ll sand it all down, stain it and deliver it to a fellow student moving in with his new foster family, an Enterprise student who has spent the year trading bunks with other foster children, who has not had his own home, not had his own space, not had a place where only his head lays. His new family has a mattress ready, but no bed.

As a school project, the bed is worth about $80 in materials. As a Christmas gift to a boy with no bed, it’s worth a good night’s sleep, at least.

“I never thought I’d be able to do something like this for somebody,” Thames said. “I think about it sometimes, that I have a bed to sleep in at night and some people don’t — it’s crazy. I like being able to do this kind of stuff for people.”

Mollie Goldman, who teaches ag/mechanics at Enterprise and serves as the FFA advisor, got the idea of building beds for foster children from Toni Buchanan, an ag teacher in Clarkdale who began setting her own woodworking students on the job after learning that many foster children sleep on pallets on the floor, or less.

Goldman said several ag teachers across Mississippi have followed Buchanan’s lead, and after checking with the local Mississippi Department of Human Services offices to verify the need, she set DeLaughter, Harris and Thames on the job.

Last week, the three builders and their instructor delivered a set of bunk beds to a family in Bude. To pay for the full size bed, they built a picnic table and raffled off chances, taking in $250, which is enough to build two or three beds.

After seeing the effect the projects have had on her boys, Goldman plans to keep building beds.

“I saw the change it was making, not only for the kids we’re building beds for, but on my children. It has humbled them,” she said. “High school kids just don’t think about not having something so basic as a bed. This had kind of opened their eyes.”

Goldman said charity bed-building for the ag program is a perfect fit — the students’ curriculum already calls for instruction in basic carpentry skills, and she’s putting them through the paces. She has a simple set of instructions for the bed, and calls out the steps while the three juniors do all the work with tape measures, levels, saws, drills, bits, jigs, clamps, sandpaper, brushes and stain.

The beds are simple — all right angles, all made with untreated 2-by-4s, 4-by-4s and 2-by-6s. Goldman requires perfect work. If there’s a gap in the boards, if the pieces aren’t flush, if the angles pull off of 90 degrees, the drill goes in reverse and the screws back out.

“Take it down,” she told the juniors Friday when a bedrail didn’t line up just right with one of the bed’s four-by-four feet. “Y’all know me better than that.”

Goldman said there are only two difficult aspects of building beds for foster children in the school’s ag shop — one is the constraints of working in 50-minute windows before classes change, and the other is materials.

The class is still living on the $250 from the sale of the picnic table, but the next foster family the the students will build for has three young children all sharing a single mattress on the floor, and the triple bunkbed Goldman has planned for them — a double bunk with a low pull-out bed — will be a more intensive build. She also wants to be able to stockpile boards so the students can jump right into builds when needy families are identified.

Anyone wishing to make a donation to the Enterprise ag/mechanics program may do so by calling the school office at 601-833-7284 and asking for Goldman. The class needs lumber — primarily two-by-sixes — or the cash to buy it.

“We’re applying all the things we learn in ag/mechanics, and they’re getting a dose of life, too — leadership skills, compassion, empathy,” she said. “The students go with me to deliver and set up the beds.”

The three juniors were especially careful with the full size bed. They know the student.

“He’s a good guy, and I’ve heard some of the struggles he’s been through in his life,” DeLaughter said. “It makes me want to build this bed even more.”

Harris said he never expected to be doing charity work in the shop.

“To help people in need, whenever they need it, makes you feel pretty good,” he said.

Singing about hot chocolate in September might be a bit odd, but the extra practice will come in handy Tuesday... read more