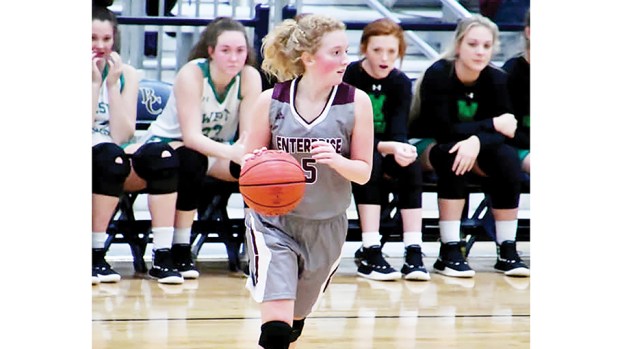 Photo by Stacy Leake Britany Barnett scored 11 points and grabbed eight rebounds in a 48-35 Enterprise victory over Salem on Friday night. It was a season high in points and rebounds for the senior Barnett.

The Enterprise Lady Yellow Jackets (4-7) snapped a four-game losing streak on their home court Friday as they defeated the Salem Lady Wildcats (0-9) by a final score of 48-35.

Both teams played aggressively in the first half, which saw both squads in the double bonuses by the time there were five minutes left before halftime. The second half was a little cleaner, as neither team reached more than seven fouls throughout the rest of the game. The Lady Jackets grabbed the victory by winning the rebound battle and creating more turnovers in the second half than the Lady Wildcats.

“We out-hustled them tonight,” said Lady Yellow Jackets senior Britany Barnett. “We made a lot more shots than we have been making. It was a rough game with all the fouls, but we pulled through.”

The Lady Wildcats opened up the game on a 5-0 run before a basket by Gracie Thompson put Enterprise on the board.

The game would then see the first of two technical fouls, as tempers started to build and Salem was hit with the first T.

Enterprise led 10-9 after the first quarter.

The Lady Yellow Jackets opened up the second quarter, separating themselves from the Lady Wildcats.

With both teams in foul trouble, Enterprise was able to convert more free throws than Salem.

Down 21-13 with just over four minutes left in the first half, Salem started a run that cut the Enterprise lead to just two points — 24-22 — at halftime.

The Lady Wildcats opened up the second half hitting a three-pointer to claim the lead before Barnett grabbed a defensive rebound and drove the length of the court for a layup that put Enterprise back on top.

Enterprise would start to gain separation as the third period went along, taking a 40-29 lead into the final quarter.

“It was an ugly game due to the number of fouls called,” said Lady Yellow Jackets coach Shane Adams. “I thought the girls played hard. They did what they needed to do to get the win. The bench, who had to come in due to the foul trouble, did a wonderful job. I was proud of the girls for getting the win.”

Enterprise plays at Lumberton on Friday.