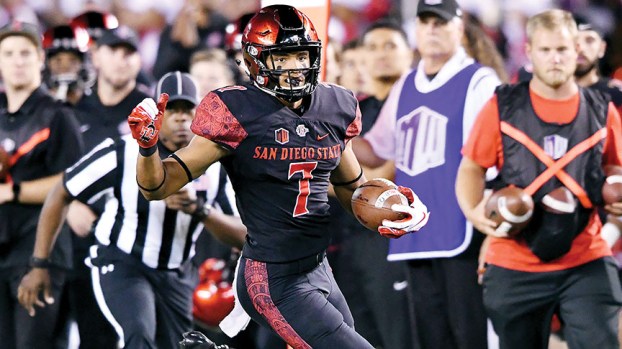 Photo courtesy of SDSU Athletics Former Brookhaven High Panther Fred Trevillion finishes his college career tonight at 7 p.m. on ESPN when his San Diego State Aztecs take on the Ohio Bobcats in The Frisco Bowl. Trevillion has caught 22 passes for three scores and 598 yards in 2018.

Road back for Trevillion ends tonight

Last week, The Daily Leader ran a brief look around college football that spotlighted area alums who played the game at the college level in 2018. You’ll have to forgive the oversight of leaving former Brookhaven High Panther Fred Trevillion off that list.

Trevillion himself knows that following his journey from Brookhaven to San Diego State hasn’t always been the easiest to keep track of. It’s one that has been filled with detours, obstacles and what felt like a GPS stuck for a year saying, “recalculating.”

The former Panther and current senior wide receiver can now look back on the hard times with a feeling of gratefulness. That wasn’t always the case, though.

“There was a time in my life where I really thought I was done with college football,” said Trevillion. “I thought I had wasted every opportunity that I had been given.”

The journey for Trevillion on the college level ends tonight when his San Diego State Aztecs take on the Ohio University Bobcats in The Frisco Bowl at 7 p.m. on ESPN.

It all began for him on the fields and courts of Brookhaven. A prodigy with a ball in his hands, Trevillion had long been pegged as the next big thing to come through Brookhaven High School.

Since he was in pee-wee, people saw the potential in Trevillion — the raw athleticism that made him a star on King Field and in Sinclair Gymnasium for Brookhaven High, but also his poise off the field and his grades in the classroom.

Trevillion signed with San Diego State in 2014. He had been a do-everything star for coach Tommy Clopton at Brookhaven High. Used mostly as a wide receiver until his senior year, Trevillion was electric with the ball in his hands. In 2013 as a senior, he passed for nearly 1,700 yards and rushed for another 650 on the ground when his team needed him to play quarterback. He scored 27 combined touchdowns and threw for seven of those scores to his favorite target, his brother Javontae. In a first-round playoff upset of then 10-1 Pascagoula, he totaled 226 yards of total offense to lead his team.

Like Jimmy Johns before him and Leo Lewis after him, Trevillion made the game look easy. It came so naturally, why would he think it would ever be any other way?

He played in 12 games as a true freshman safety and also saw action on special teams in his first season at San Diego State. However, this is where Trevillion ran into his first roadblock. The coaching staff at SDSU needed to get his attention.

Trevillion doesn’t have to go into deep details about what happened after that freshman season. The sincerity in his tone lets you know what’s important.

“San Diego State let me know that I was going to be suspended as a sophomore,” said Trevillion. “I was just too immature, and I wasn’t taking care of business like I should have been. Our head coach Rocky Long is an old-school guy, he treats everyone the same and doesn’t play favorites. I earned my punishment.”

He decided to transfer back closer to home and signed with Pearl River Community College. That didn’t last long though. Trevillion had a disagreement with the Wildcat coaching staff and packed his things up to come home to Brookhaven.

This was another learning experience, as he was saddled with a large bill from his abbreviated time in Poplarville.

If Trevillion was ever going to attend college again, he’d have to pay back that debt first.

His mother Stephanie worked for many years as a server at Cracker Barrel on Brookway Boulevard. When Fred needed money to pay back PRCC, he went to Cracker Barrel and applied as a server. He was soon wearing an apron and asking customers if they wanted biscuits and cornbread with their meal.

To go from being the best athlete in town and Division I signee to waiter within two years, Trevillion was humbled in a way that not many will ever experience.

“I learned that when you’re the star, everybody wants to be your friend, but when that all ends, people will ignore you like you don’t exist,” said Trevillion. “People would come in, see me waiting tables and I could tell they were trying to figure out if it was really me or what.”

The job served its purpose, though. Trevillion was able to save the money he needed to pay back Pearl River. He credits the unwavering support of his mother for keeping him focused during that time. He’s also thankful that Tucker Peavey likes to occasionally eat out.

Current BHS head coach Peavey was then the head coach at Southwest when he saw Trevillion one night in Cracker Barrel. He asked the former Panther what he was doing back home.

“Coach Peavey couldn’t believe that I wasn’t in school anymore,” said Trevillion. “I had been working for about six months and had paid off everything I owed. He told me to come see him at Southwest so we could talk about me getting back into school.”

In 2016, Trevillion caught six passes for 231 yards and two touchdowns as a wide receiver at Southwest after being out of school for all of 2015. He always knew where he wanted to go if he ever got a chance to play Division I football again.

“I knew I wanted to go back to SDSU if I ever got the opportunity,” said Trevillion. “I had maintained a good relationship with them when I left and coach Long had let me know the door was always open for me to return.”

That’s exactly what happened, as Trevillion bounced back to San Diego and caught 12 passes for 327 yards last season. His 27.2-yard catch average was the highest in the nation. Heading into the bowl game tonight he’s the leading receiver on the team with 598 yards and three touchdowns on 22 catches. He averages 27.18 yards per catch and had a 76-yard touchdown catch against Hawaii that put him on SportsCenter.

Trevillion will graduate in May with a degree in social sciences. He’s leaning toward signing with an agent and preparing for the NFL draft. He knows his current projection would be a late round pick or as an undrafted free-agent. His plan is to work toward the Aztec Pro Day and showcase his athleticism in that setting. As good as a season as he’s had, the Aztec offense has been hammered hard this season by injuries to quarterbacks, running backs and the offensive line.

Come whatever in the bowl game tonight or after the season, Trevillion has an outlook now that is grounded and humble. He carries himself with a wiser nature that comes with knowing how close he came to losing his dream.

“The hard times taught me to slow down and to really enjoy all of this,” said Trevillion. “I love football more than ever and I’m thankful the opportunities it has provided me. I’m in college in the beautiful, sunny setting. SDSU is one of the most diverse universities in the country so I’ve been exposed to so many different people and cultures.”

Trevillion credits the words spoken by Peavey in their first meeting at Southwest as being the ember that reignited his fire.

“Coach told me not to give up on myself,” said Trevillion. “I was getting close to that point of just being done with it all. He told me he didn’t want to see me go down that road and be someone who ends up with regrets. I wish I’d made better decisions when I was younger, but I know those mistakes have made me the man I am today. When you fall down you’ve got to get back up.” 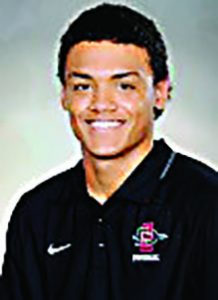