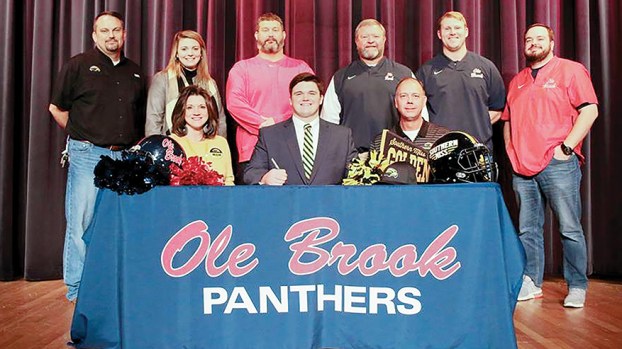 Wright ‘to the top’ — BHS senior inks with Southern Miss

Coker Wright is one proud Panther.

The Brookhaven High senior offensive lineman put pen to paper on Wednesday to sign a letter of intent with the University of Southern Mississippi in his school’s auditorium. Wright will join two BHS alums on the Golden Eagles’ roster in Hattiesburg, as J.J. Jones and Trace Clopton will be sophomores next season.

Wright racked up 27 offers during his recruitment, but it was the first one that mattered the most.

“Southern was the first school to offer me,” said Wright. “It happened in the spring of my junior year and after that I was just comparing every school that recruited me to them.”

Wright played on the offensive and defensive lines as a junior. He was a key piece on an 11-2 BHS team that won their region. His hope was to play college football, but he wasn’t sure if he would get Division I offers before his senior season.

“I was just hoping to get some junior college offers,” said Wright. “I thought I would need to go the JUCO route and then prove to people that I could play Division I.”

Wright bulked up after his junior season and the offers began to roll in. Schools like South Alabama, Louisiana-Lafayette, Tulane and Memphis began calling. As it happens in recruiting, the interest in him began to snowball and Wright was fielding calls from schools like the University of Illinois and Nebraska.

All along, though, Wright knew that he wanted to stay in-state. In early October, he made a verbal commitment to sign with the Eagles. When Wright let head coach Jay Hopson know that Hattiesburg would be his future home, he then set out to start recruiting others to join him.

“Coaches always say that players are the best recruiters,” said Wright. “We had a group chat with a bunch of recruits in it and I think we signed most everyone that we wanted.”

The signing class put together by Southern Miss has been ranked among the strongest in C-USA. The Eagles picked up running backs T.Q. Newsome of Gulfport High, Dee Baker of Northwest Rankin and Antavious Willis from Velma Jackson.

They also got a huge pick-up under center when they signed quarterback Jaden Johnson out of Kirby High in Memphis. Johnson had previously been committed to Louisville before the Cardinals had a coaching change.

Southern Miss also made some big additions via the junior college route with Copiah-Lincoln Community College linebacker Swayze Bozeman being one of their biggest gets.

“I’m excited about playing with Swayze,” said Wright. “He’s a guy that can fly to the football.”

Of their 19 signees on Wednesday, USM signed seven offensive linemen. Offensive lineman Tre Johnson of Iowa Western C.C. began his career at the University of Miami and became an Eagle on Wednesday. Glendale C.C. lineman Tanner Hawthorne started his career at Purdue before transferring to a community college and signing with the Eagles.

Wright actually played very little offensive line as a senior. His team needed him more as a defensive end, but he says the Eagles see him as an interior lineman on the offensive side.

“Coach Hopson has told me that if I’m willing to put in the work, they could see me learning positions on both sides of the ball,” said Wright. “I’ll do whatever my team needs me to do. I went to Hattiesburg on unofficial visits more than a few times during the season. I was around the team and the coaches and got to see how they worked together. There is a lot of young talent on that team. I feel like something special is being built there and I want to be part of it.”

In the Mississippi/Alabama All-Star game last weekend, Wright played on the offensive line for a 24-20 Team Mississippi win. The Mississippi All-Stars rushed for 257 yards in the victory. Alabama got a late touchdown to make the score look closer than it had been. Wright says the win was much more convincing than the final indicated.

“We ran it down their throat,” said Wright. “I was mad the score didn’t show just how much we dominated them. It was a lot of fun to see them get tired of trying to stop our backs.”

While at the game, Wright made a connection with fellow all-star East Central linebacker Avery White. A 6-foot-4, 195-pound speedster, Wright is planning on signing with the Eagles in February.

“He’s got a lot of pop when he hits you,” said Wright. “We’re planning on rooming with each other in the fall.”

Like Clopton last year, Wright will graduate early and enroll at USM next month. The idea of enrolling early and going through spring practice was once the exception in college football. Now, it’s nearly the rule. The Southern Miss coaching staff lauded the advantage it gave Clopton and the part it played in him starting at center as a true freshman.

Wright plans on majoring in kinesiology when he gets to Hattiesburg. He also expects to see his family decked out in black and gold every time the Eagles play.

“I’ve been blessed with a great family,” said Wright. “They’re very supportive of everything I do. I think the bookstore over there is going to see some big tickets when my folks get done shopping for next season.”