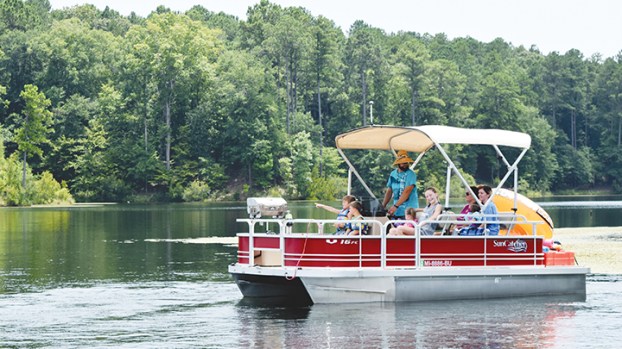 Photo by Adam Northam The Broussards of Summit and the McGoverns of McComb head out into Okhissa Lake this summer for an afternoon on the water.

A six-month clock is ticking for a regional economic development group’s plan to purchase and develop national forest land around Okhissa Lake in Franklin County.

With President Donald Trump’s signature of the new farm bill Thursday, the McComb-based Scenic Rivers Development Alliance has 180 days to submit a letter of request for conveyance to the U.S. Secretary of Agriculture stating its intent to purchase 150 acres of Homochitto National Forest land on the lake’s northwest corner, with the long-range goal of developing a hotel and conference center to attract overnight visitors to Southwest Mississippi. Upon receipt of the request, the agriculture secretary will determine if selling the property is in the public interest and, if so, convey the land to Scenic Rivers for fair-market value.

Joseph Parker, executive director of the alliance, said the group would have more time to finalize its development plan after the notice to purchase the property is submitted.

“There’s a lot of ‘ifs’ out there right now on this project,” he said. “We’re working on some preliminary stuff right now, but we need a feasibility study to give us some information to go out and present to investors.”

Parker said Scenic Rivers will seek a “Yellow Book” appraisal on the national forest land, an evaluation done to uniform standards for transactions involving the federal government. The appraisal will give the group the value of the land — a 2015 study by the Federal Housing Finance Agency estimated the value of public land in Mississippi at $5,565 per acre.

If those numbers are still good, the alliance will need almost $835,000 just for the land.

“We have applied for a grant with the USDA to complete our feasibility study, and we hope to hear something back by early spring. Then, we’ll go out and talk to investors and start looking for funds to develop the lodge and conference center, with our feasibility study to show our business model,” Parker said. “The study will be the foundation of how we come up with a figure for how many rooms we’ll need, what size conference center, what amenities will be required. We’ve been talking to people along the way, and we’ve had some interest in this project.”

Parker said a project cost won’t be available until after the feasibility study is complete, but the alliance has had estimates the development could cost between $25 and $50 million.

Scenic Rivers is a regional alliance among the boards of supervisors of Amite, Franklin, Pike and Walthall counties, as well as the City of McComb, the Pike County Economic Development District and the Wilkinson County Industrial Development Authority. The Legislature formed the alliance int a quasi state agency in 2018.

The group was first formed to assist with outdoor-based economic development. It took over management of the Bogue Chitto Water Park, given to Pike County upon the closure of the Pearl River Basin Development District, which ran out of funding and shut down July 1.

The plan to pursue development around Okhissa Lake is as old as the body of water itself, a 1,075-acre fishing lake with 39 miles of shoreline, boat ramps, restrooms and parking areas that opened in 2007 and draws an estimated 10,000 visitors per year, according to the National Forest Service.

Proponents of the development plan say the forest service was supposed to continue building attractions around the lake, but the service says its efforts to do so were met with little interest from developers.

U.S. Sen. Cindy Hyde-Smith amended the farm bill earlier this year to allow the land sale and give the alliance a shot at improving the lake’s regional draw.

“I’m very excited that after many years of delay, we have a solution to allow economic development to occur at Lake Okhissa,” Hyde-Smith said in July. “Using the lake as a tool to draw jobs and tourists to Southwest Mississippi was a primary goal for building the lake. It’s time that goal be met. The past decade has shown us that Lake Okhissa is great for fishing and boating, but it only offers visitors a few basic amenities. These are not enough to capitalize on the full potential of the lake, which if successful, can create jobs and generate economic activity. I believe we’re at a point where local leaders, the State of Mississippi, and the Forest Service can all agree on a path forward.”

Privatizing public lands is an issue of much debate in the western U.S., where the federal government owns giant tracts of land that span across the desert and mountains. Forty-six percent of the 11 traditionally western states are owned by the government, and in recent years Republicans have begun efforts to transfer land back to state ownership.

Ranchers, developers and mineral producers tend to support the federal government divesting federal lands, while outdoorsmen lobby for the land’s protection. States have a track record of selling off public lands to private developers — earlier this month, Utah auctioned off 154,000 acres for oil and gas drilling.

The new farm bill is an $867 billion package that provides aid to U.S. farmers but rejects Republican-sought cuts to federal food stamp programs. The Trump administration announced Thursday is would seek to tighten work requirements for food stamp beneficiaries.

It’s cheerio for West Lincoln cheerleader off to London

A West Lincoln cheerleader’s Christmas present is so big it won’t fit under her tree and will allow her to... read more