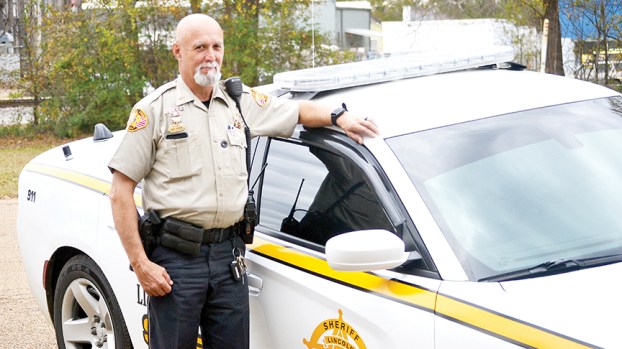 Photo by Donna Campbell Sgt. Wade Hinshaw, an Arkansas native, started his career with the Lincoln County Sheriff’s Office as a reserve deputy 14 years ago.

A Lincoln County sheriff’s deputy who drew fire away from two fellow officers while serving a warrant in 2015 doesn’t consider himself a hero.

Hinshaw — along with deputies Stewart Thornton and Ian Smith — saw suspect Christopher Lee Hamilton step out of his residence Dec. 3, 2015, wearing a bulletproof vest and brandishing a 9mm pistol.

Hamilton shot at Thornton and Smith with a rifle and the pistol. During the melee, Hinshaw tried to distract Hamilton by calling his name, putting a target on himself.

Hamilton would later plead guilty in 2017 to two counts of attempted murder and was sentenced to 65 years in prison.

Hinshaw, 56, has been chosen by the Brookhaven-Lincoln County Chamber of Commerce and The Daily Leader as a Hometown Hero.

Dodging bullets is not the kind of job Hinshaw envisioned for himself when he left Arkansas for Lincoln County about 35 years ago to help open the Walmart Distribution Center.

A blind date led to a 33-year marriage and two children, a daughter and a son.

His son was disabled and so Hinshaw took a job as a teacher’s assistant at Loyd Star Attendance Center so he could be there to help. His son, who died this past February, graduated with honors from Loyd Star, but when his studies at Loyd Star ended, so did his father’s job.

Hinshaw had already started working with the newly-formed Lincoln County Sheriff’s Reserves here and there, wearing a badge and uniform at events, but when the teaching job faded, he needed full-time work.

He talked to newly-elected Sheriff Steve Rushing, who didn’t haven an opening for a deputy, but needed someone to serve warrants full time. Hinshaw did that through the summer, filling in on shifts when he was needed.

When an opening came up, Hinshaw was hired.

“Wade is a solid, dedicated officer,” Rushing said. “Anyone in the community who knows him, knows he will help at any moment.”

Helping people is what drives Hinshaw to continue the job. He’s not one to write lots of tickets, but will give out citations when they’re needed.

“A lot of people think that law enforcement — deputies, police, troopers — they’re just out to get you, but it’s not that way, not for a lot of us,” he said.

Hinshaw has spent a quarter of his life in service to his community as a way to say “thank you” to those who have served him and his son.

“I had a lot of help with him over the years, and the way I see it, it’s a way to help repay and give back to the community,” he said.

When he’s not covering every mile of blacktop in Lincoln County in his patrol car, he raises beef cattle on his farm north of Bogue Chitto. That’s a full-time job in addition to his regular full-time job.

He and the Mrs. are active at Bogue Chitto Church of Christ.

He doesn’t consider himself a hero.

“I like helping people. And just helping people, there’s nothing heroic about that,” he said. “The brothers in blue that have laid down their lives, our firefighters who go up in burning houses or the first responders — our paramedics and even your volunteers — that are going out and saving lives. That’s what I see as heroes.”

To determine who owns what properties in the woods off the east side of Bogue Chitto Attendance Center, it takes... read more