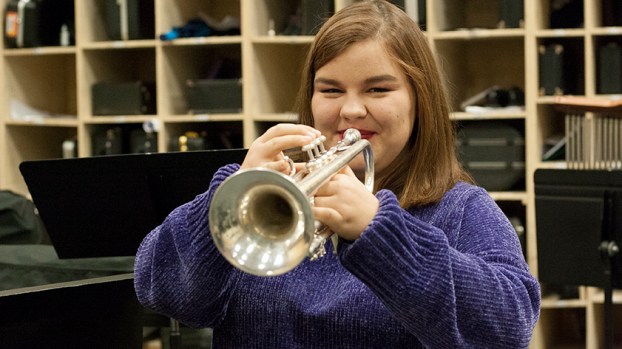 Photo by Adam Northam Kirsten Scroggs, a junior at Loyd Star, will travel next summer to Italy as part of the 2019 Mississippi Lions All-State Band.

Loyd Star trumpeter will travel to Italy with all-star band

She’s got six months to learn.

The 16-year-old Loyd Star Attendance Center junior is headed there next summer as a member of the 2019 Mississippi Lions All-State Band. She and 144 other student musicians from around the state will travel to Florence, the birthplace of the Renaissance; to Milan, the top city in the world for fashion and design; and to Rome, the city on seven hills, the home of western civilization. In each historic city, they’ll see the art and architecture that has inspired creators for two millennia, and in Milan they’ll perform, and compete, in the international Parade of Nations, which draws around 10,000 club members from more than 100 countries.

“I speak zero Italian. I’ve still got a little bit to figure that out. The Statue of David — that’s all I know,” said Scroggs, the first-chair trumpet player and drum major at Loyd Star. “I’m nervous, but it will be fun. It’s going to be a great experience.”

Scroggs earned a spot in the prestigious honor band’s 24-man trumpet section with room to spare after surviving rigorous tryouts at Pearl High School earlier this year. The auditions were held in two rounds a week apart, Nov. 17 and 24, and included a mixture of scales, a prepared piece and sight-reading, a hidden piece of music players are given only a few moments to study before playing from scratch.

After the first round, Scroggs ranked No. 35.

“I thought I did so well on my sight-reading, but I later found out I did not. I played the whole piece in the wrong time signature,” she said. “After that first week, I didn’t think I’d make it.”

She did well enough all-around to make the cut to the second week. Seven days later, she auditioned again and made a big jump in the order, up to No. 18.

After the second round, the names of all participants were unveiled on a large board, with the 145 accepted all-state members listed at the top under “band,” with unaccepted members listed down the board under “alternates,” “honorable mentions” and “other artists.” Scroggs was trying not to get her hopes up, so she read the board from the bottom-up, searching for her name.

Her mother, April Scroggs, read from the top and found her daughter’s name.

“My momma pointed it out to me,” Scroggs said. “I really didn’t expect to make it. I was terrified, very terrified. The audition my sophomore year was good experience, and I’m glad I went.”

Scroggs is the first student from Loyd Star to make the Mississippi Lions All-State Band.

“I love it. I love we have a small, close-knit band, and I’m glad I can go represent us, maybe make a little name for us,” she said.

Scroggs will report to Pearl River Community College for a short band camp on July 1, and the Lions will fly out of New Orleans to Italy, where they’ll perform in the parade July 6. The Mississippi band has placed first in the competition since 2003, except for twice — 2008 and 2012 — when the group did not attend the annual convention.

But first, Scroggs has to raise some cash. It will cost her around $4,000 to make the journey to Italy, and her family and band director are planning a few fundraisers for her.

“We’ll do whatever we can to try and get her there,” said Loyd Star band director Jeremy Donald. “She’s a hard-working band member, easily one of the hardest-working kids I’ve ever met.”

Donald said Scroggs’ acceptance into the all-state band is a big moment for the school’s band program.

“This is one of those things, especially here at Loyd Star, that does wonders for these kids,” he said. “They can say they’re capable of making it, and that drives them more, and the entire band gets better. I’ve had three of four kids asking me how to prepare for auditions in 2019. You throw in the possibility of Italy, and here they come.”

A Lincoln County sheriff’s deputy who drew fire away from two fellow officers while serving a warrant in 2015 doesn’t... read more