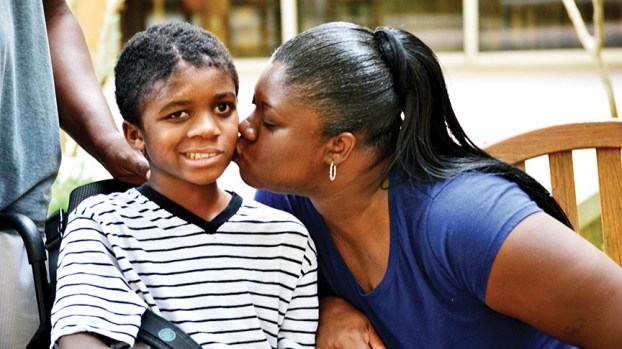 Daily Leader file photo/Darrius “Boo” Bass gets a kiss from his mother Grace Price in the Rainbow Garden at Batson Children’s Hospital.

Over the past year, The Daily Leader has published dozens of stories that can be called “feel good” stories. Here are 10 of the best.

After nearly dying twice, Darrius “Boo” Bass lived through the shooting that occurred in June at his aunt’s house on Henry Myers Street.  Bass was a standing in the yard when Taruis Maurice McNair accidentally fired a gun from inside a parked car. The bullet went through the windshield and struck Bass on the right side of his head.  He stayed in the hospital months on a ventilator, part of that time in a coma. He is home and continuing to improve.

‘We’re having a baby today’

E4 Spc. Dylan Smith watched his wife Dusti give birth to their firstborn son Easton Burke Smith via Facetime at 1:46 p.m. on Aug. 7.  When she found out she was in labor, Dusti called her husband immediately. The new father was stationed in Kuwait with the Mississippi Army National Guard’s 155th Armored Brigade Combat Team, so he was unable to be in the operating room with his wife.  Smith flew to the United States soon after and stayed a few days with his wife and newborn son.

Vondell Brown says her granddaughter C’aria Brown saved her life when she called 911.  Her granddaughter was asleep, but she woke up when Brown scratched her with a hangnail on her finger.  C’aria called 911 for her grandmother after not being able to communicate with her. It turns out Vondell Brown’s blood glucose level was dropping dangerously low and she couldn’t talk or move.  After calling 911 and her mother, C’aria helped her grandmother get dressed and waited for the ambulance to arrive.

A teacher at Alexander Junior High began collecting clothes for a cause.  Laura Ann Walker came up with ‘Matthew’s Closet,’ a non-profit initiative to provide formal wear to area girls.  The initiative was started to give girls who didn’t have a way to buy dresses for prom season or dances something to wear.  The name Matthew’s Closet was inspired by Matthew 25: “When I was naked, you clothed me.”  Matthew’s Closet wasn’t meant for just girls, as boys can find formal wear as well. Walker hopes to expand and provide for other needs, too.

The students of Enterprise Attendance Center gathered along the roadside near the school to pay their respects to alumni Zach Moak and James White.  Although many of them did not know the officers personally, the families of the fallen officers would know them.  The students held flags as the funeral procession drove by.  The football field was lettered with “B32” and “B33,” their radio handles for the police department.  From kindergartners to seniors, the students watched with respect as the funeral procession for Zach Moak passed by the school.

Allie Mae Humphries celebrated her 100th birthday in December surrounded by family and friends.  A celebration was held at Macedonia M.B. Church in her honor, with four generations of Humphries in attendance.  The celebration included a presentation of a tiara and a corsage to the woman known as “Mam-Maw.”  Poems were read and songs were sang to celebrate as well.  Maw-Maw herself was delighted at the event, and described her day being made after the effort her family put into her 100th birthday.

The Jimmy Furlow Senior Citizen Center held the All Male Revue Talent Show in September, which featured singers, dancers, a poet and about a dozen senior models who strutted and rolled in wheelchairs down the makeshift runway in their Sunday best.  Seniors weren’t the only ones to participate in the show.  Aaron Walker, a maintenance technician at Silver Cross Health and Rehab, participated in the event as well.  The women who attended the event at the senior center watched and laughed as their fellow seniors strutted down the runway.

He went from teacher to shepherd

Bro. Zach Kilpatrick didn’t always want to be a preacher.  He grew up planning to be a teacher, a science teacher specifically.  He attended college, graduating with a bachelors’ and master’s, and taught for a while.  After answering the call to ministry, Kilpatrick attended seminary and became a pastor. He preached at several churches before coming to Brookhaven.  He accepted the pastor position at Mount Zion Baptist Church right before the beginning of 2018 and has served his congregation since.

Storytime gets little ones excited about books

Every Wednesday from 10 to 10:15, Youth Services Librarian Kasie Beth Brown held a reading circle for area children.  Storytime at the Lincoln-Lawrence-Franklin Regional Library was meant for small children, ranging from infancy to four years old.  Brown welcomed children of all ages, even if their parents thought they might be too hyper.  To help engage the children, Brown incorporated songs, dances and visual aids to the stories she was reading.  Ultimately, the goal was to help the children get excited about reading.

A few familiar faces put their hats in the ring Wednesday on the first day of qualifying for candidates running... read more