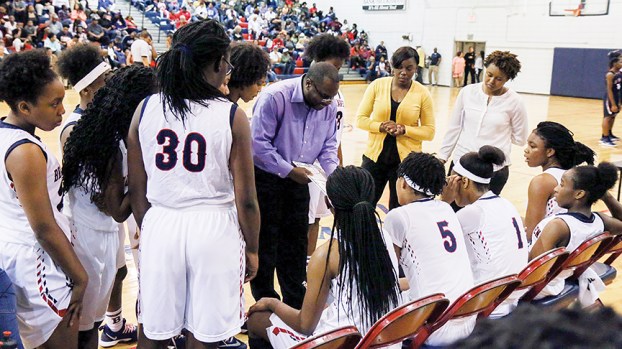 Photo by April Clopton Coach Preston Wilson gives instructions to his Lady Panthers last season in their playoff matchup against South Jones. The Lady Panthers defeated South Jones 61-58 in the second round of the playoffs and will also host the Lady Braves this season at home. Due to reclassification BHS and South Jones will be region rivals beginning with the 2019-2020 season as Brookhaven High moves into a region with South Jones, West Jones and Laurel High for basketball.

In late October the MHSAA released its reclassification numbers and at that time we wrote about the move for Wesson down to 2A after six years in 3A. With 2019 upon us let’s look at how each area school will see changes in their divisions during the 2019-2020 and 2020-2021 seasons.

New regions for fastpitch softball and baseball have not been released yet. 1A, 2A, 3A, and 4A schools play in the same regions in nearly all sports. The schools a team plays in football are the same teams they’ll play in basketball, baseball, and softball. 5A and 6A schools play in larger football regions that are then split into four team divisions for basketball and baseball.

Not much will change for the largest school in our area, 5A Brookhaven High School. The Panthers did lose North Pike out of Region 3-5A as the Jaguars moved back down to 4A. North Pike will be replaced by Jim Hill as the region is now home to three JPS schools in the Tigers, Forest Hill and Wingfield.

Perhaps no school in the area got better reclassification news than Lawrence County as the Cougars will move out of a stacked and packed Region 7-4A to a must more familiar Region 6. Joining the Cougars in Region 6 are longtime foes McComb, North Pike and South Pike along with Raymond and Lanier. To say that the Cougars will save a little money on travel over the next two years is putting it mildly.

“It’s going to make travel better for all of our sports, not just football,” said Cougar head football coach Jesse Anderson. “Going to Leaksville or Poplarville on a weeknight was tough on our student-athletes, as I’m sure it was tough on our opponents when they had to come to us. We’ll still see tough competition with North Pike moving back down and South Pike having a great season last year.”

As it’s been written the local Region 7-2A will get another member next school year when Wesson joins Amite County, Bogue Chitto, Enterprise, Loyd Star and West Lincoln in the division. The Cobras are all too happy to slither out of a loaded Region 8-3A.

The changes in soccer involve a shift in semantics as the former 1A-2A-3A division will now be known as Class I. Class I-Region 7 is where most of the local teams reside as it’s made up of Bogue Chitto, Franklin County, Hazlehurst, Loyd Star, Wesson, and West Lincoln.

Lawrence County will play in Region 6-4A with McComb, North Pike and Sumrall. Brookhaven High will see their Region 6-5A unchanged with Natchez, Forest Hill and Wingfield all remaining in the division.

Basketball is a sport that usually sees upheaval during reclassification on the 5A level. The large 7-8 team divisions are broken into smaller regions for basketball and a trickle down of changes come to hoops depending on what happens with the football regions.

The biggest change in the area is Brookhaven High moving to a completely different basketball division. The Panthers are currently in a region that features Forest Hill, Natchez and Wingfield. Before that they were in a region of the same teams, except swap out Forest Hill for Provine.

That’s been a daunting division for the Panthers in the past. BHS and Provine had some great matchups in their time together and the BHS boys (14-2) and Forest Hill (12-4) will no doubt be a must-see game this season.

The Panthers are now moving in to a Jones County based region with West Jones, South Jones and Laurel High. Just to compare where the Panthers are coming from and where they are going to, none of the three Jones County teams currently have a winning record thus far this season.

The region will however be loaded on the girls’ side as West Jones and South Jones are consistently 5A contenders along with BHS. At press time as the Lady Panthers sit at 15-1 as their future region competition South Jones holds a 14-2 record (South Jones plays at BHS on Feb. 1) and West Jones is a perfect 15-0. The BHS girls have gone perfect in region play for the last two seasons.

“My thoughts have always been we have to compete either way we go,” said BHS girls’ coach Preston Wilson. “It’ll make it tough on travel and scheduling, but we’ll be prepared for it.”

Slowpitch softball will now be divided into two divisions, Class I and Class II. In the past the sports had three divisions.

Bogue Chitto will compete in Class I-Region 7 with Crystal Springs, Franklin County, Hazlehurst, Jefferson Conuty, and Wesson. There are 46 schools statewide that make up Class I.

On Thursday we began a look back at the biggest local sports stories of 2018 with five top moments. Today... read more