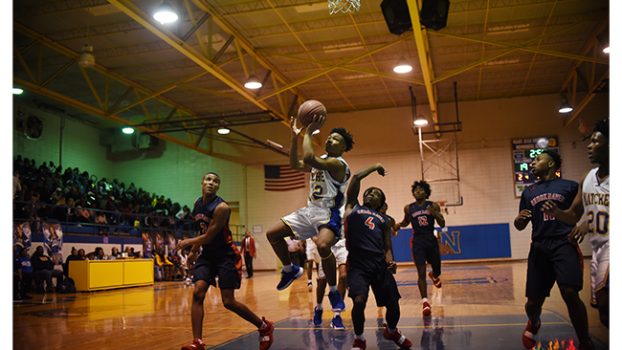 The first quarter was a defensive struggle and both teams missed scoring opportunities, but Natchez High still finished the quarter with a 10-8 lead.

Brookhaven head coach Marcus Flippin pointed out to two things that his team had to fix.

“Free throws, finishing at the rim, especially early we missed some easy ones,” Flippin said.

In the second quarter Brookhaven out scored Natchez High by 3 points to go into halftime with a 24-22 lead.

The Panthers kept the momentum in the third quarter by making six 3-pointers.

“Isaiah Wall made a couple of threes in the corner and they were big. We haven’t shot it that well so that helped’’ Flippin said.

Brookhaven finished the third quarter with a 14-point lead.

“We got some separation there, we knew if we just kept climbing and keep No. 5 (James Singleton) from getting to the basket” Flippin said.

The score was 50-36 at the start of the fourth quarter.

Natchez High head coach David Haywood said even when the lead got to double digits, his team was still in striking distance.

“We played this team the last couple of years, no matter which team gets up by 14 or 15 points the other team is gonna make a run. I felt like we always had a chance until it got to the end,” Haywood said.

Natchez High was not able to take back the momentum and overcome the deficit in the fourth quarter.

“At the end of the first quarter and the beginning of the second we had a couple point lead. We were making baskets then we started to miss a few. That energy transferred from offense to defense. We started giving up drives, wide-open shots, and offensive rebounds. When you are trying to beat a good team, those are some of the things you cant do,” Haywood said.

Haywood said that he assumes the blame for this loss.

“I’m going to take this one as a coach. I don’t think I had my guys mentally ready. I tried to intensify practice, but as a coach of this team I have to do better to make sure it translates over to the game, not just at practice,” Haywood said.

James Singleton led the Bulldogs with 15 points and Kedarius Stampley chipped in with 11 points.