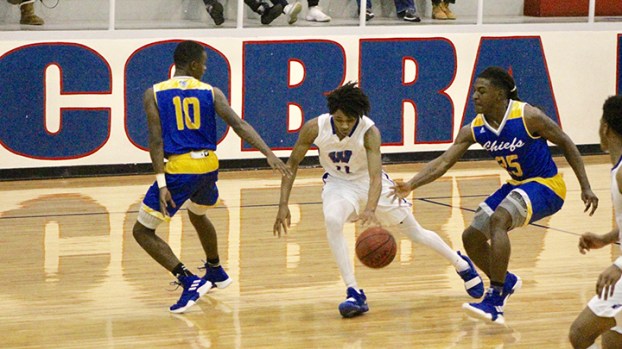 Wesson guard J.D. Allen splits the Tylertown defense on Friday night. Allen scored a game high 24 points despite suffering a cut to his face early in the game when he fell after attempting to block a shot.

The Wesson Cobras were swept by the Tylertown Chiefs in the Region 8-3A opener for both teams on Friday night in Wesson.

In the girls’ game, the Lady Chiefs jumped out to a 20-4 first-quarter lead on their way to a 65-28 victory. In the boys’ game, the Chiefs were able to hold the Cobras at arm’s length most of the night on the way to a 52-47 win.

Tylertown has wins over 6A Oak Grove, 5A North Pike, 5A Picayune and 6A Provine. The 17-1 Brookhaven High Lady Panthers are the only team to beat the Lady Chiefs thus far this season. Both Tylertown teams are coach by former Bogue Chitto head coach Jeremy Harrell. Last season, the Lady Chiefs went 20-5 and won the region with a perfect 10-0 record before being knocked out of the playoffs by Hazlehurst.

In the boys’ game, the Cobras (15-3) looked tight and anxious from the start as they scored their second-lowest point total of the season. The Tylertown defense has to be credited for some of the Wesson offensive futility. The Chiefs are athletic and quick and don’t over-extend their zone.

In the middle of that zone Tylertown has 6-foot-6, 280-pound senior center Quincy Young. Young scored a team-high 17 points to lead the Tylertown offense. Young battled foul trouble in the first half and spent most of the second quarter on the bench.

Wesson got good looks at the basket all night — especially when Young was out of the game — but the Cobras missed too many layups and put-backs. They also missed nine free throws.

The Cobras led 15-14 after the first quarter, but for much of the period leading scorer J.D. Allen was on the bench receiving medical attention. Allen went up to block a shot with 4:42 remaining in the first quarter and went over the back of a Tylertown player. The first thing to hit the court was Allen’s face, but to his credit the senior guard quickly jumped up to continue playing. However, a gash had opened above Allen’s eye and he was forced to the bench to be tended by the trainers.

Allen has been on an absolute tear this season, as he is averaging 23 points per game and had a season-high 43 points against Germantown on Dec 27. Allen came back into the game against Tylertown just before the end of the first quarter and drained a 3-pointer at the buzzer to give Wesson a lead.

The Cobras appeared out of sorts with Allen on the bench, though, and Wesson coach Rusty Newman says his team never regained their rhythm.

“We didn’t respond well to adversity tonight,” said Newman. “We missed some shots that were right at the basket and we started hanging our heads about it. We’ve come back in the fourth quarter more than once this season after being down, but tonight, for whatever reason, we couldn’t get over the hump.”

The second quarter was a disaster for Wesson, as Tylertown outscored them 17-5 to take a 37-20 halftime lead. With just over two minutes left in the game, Wesson had the lead cut to six and had possession of the ball but couldn’t capitalize.

Both Wesson teams will looks to pick up their first region wins tonight when they host Seminary.

In late October the MHSAA released its reclassification numbers and at that time we wrote about the move for Wesson... read more