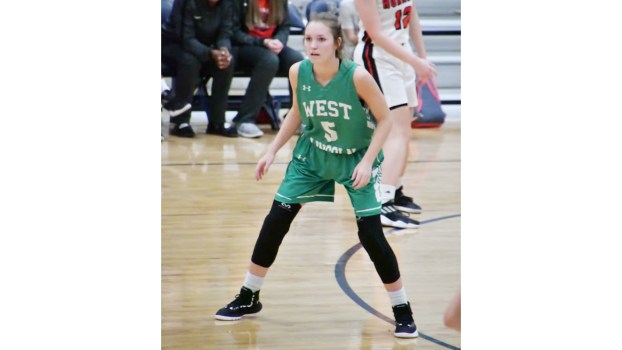 West Lincoln came back from the holiday break with a sweep of the visiting Cathedral Green Wave on Friday. The Lady Bears (12-3) defeated the Lady Wave 64-29 and the Bears (8-7) beat Cathedral 54-30.

Although the Lady Bears started the game slowly, their ability to win the rebounding battle and create timely turnovers helped them seize control of the game early in the second period.

The Lady Wave struggled most of the game to get their shots to fall, but were able to hit buckets in the fourth in an attempt to make a comeback. Regardless, West Lincoln held on for the commanding win.

The game would start off with both teams tied four-all before Lady Bears senior Katelyn Dickerson grabbed an offensive rebound and hit her bucket to give the Lady Bears their first lead of the game.

The Lady Bears would start to create turnovers as they shot their way to a 20-12 lead at the end of the first.

West Lincoln controlled the boards in the second period, outscoring the Lady Green Wave 20-4 to take a 40-16 lead into halftime.

When West Lincoln traveled to Cathedral on Dec. 21, the Bears shot the cover off the ball in the boys’ game, as they canned 20 3-pointers in an 85-44 win. The Bears didn’t shoot the ball as well in their first game back after the holiday break, but they were never threatened as they jumped up 11-3 after the first quarter on Friday.

“It was good to get back on the court and pick up two wins,” said West Lincoln coach Brooks Smith. “Both teams have to give better effort going forward, though, as we get into region play.”

On Saturday, the Bears traveled to St. Joseph in Madison for a pair of matchups with the Bruins. The Lady Bears took a 55-33 over St. Joe while the Bruins took a close 52-49 win over West Lincoln. Dickerson scored a team-high 19 points in the win over the Lady Bruins, while Karlton Byrd scored a team-high 12 points for the boys in their loss.

The Wesson Cobras were swept by the Tylertown Chiefs in the Region 8-3A opener for both teams on Friday night... read more