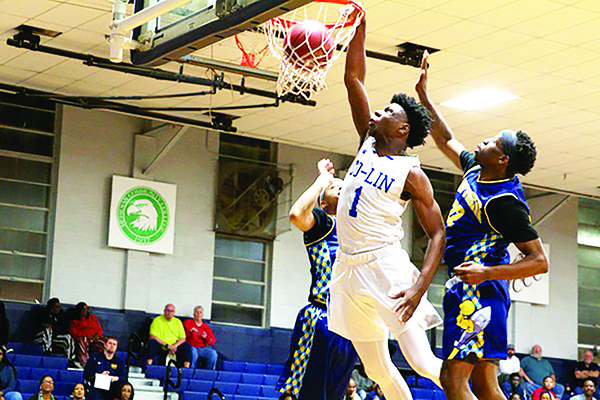 Co-Lin freshman Malik Wright throws down a first-half slam against Southern Arkansas University Tech on Monday in Wesson. Wright scored eight points off the bench for the Wolves in their 89-78 loss.

The Rockets of Southern Arkansas University Tech had the hot hand Monday night as they defeated the Wolves 89-78. The loss drops Co-Lin to 7-3, 0-1 on the year but does not affect the MACJC standings.

The Wolves are back home Thursday as Co-Lin plays host to the Mississippi Gulf Coast Community College Bulldogs. The game is set for 7:30 p.m. and can be watched live at colinathletics.com or heard live at WMJU 104.3 FM in Brookhaven.

The Rockets started off on a hot streak as the Wolves struggled to get into a rhythm in the first game of the second semester. Nine minutes into the game the Rockets led by 18, 26-8. Co-Lin began rallying back in the final minutes of the first half. Xavier Heidelberg hit a big three-pointer followed by a layup from the sophomore. Darius Kent kept the momentum in the Wolves favor and got the fans on their feet with a huge dunk and forced an SAU timeout. After the timeout, Co-Lin continued their run with four straight free throws. The 11-0 run cut the Rockets’ lead down to nine with 4:25 remaining in the first half. The Wolves continued to chip away in the first half capped off by a three-point play from Heidelberg in the final minute. At the break, the Rockets led by just four, 43-39.

The Wolves cut the lead to just two in the opening seconds of the second half after Damarius Brooks drove in for a layup. Unfortunately, the Wolves were unable to take the lead, and back-to-back three-pointers from SAU’s Mike McAllister-Boatright and a layup stretched the lead by to double-digits.

Co-Lin made a final push midway through the second half with a 7-0 run led by Lance Madison and Malik Wright. After trading baskets, and a pair of free throws Heidelberg, the Wolves had once again cut the lead to just four, 61-57, with 11:33 remaining in the game. The Rockets responded with some big three-pointers from Will Byeum and Sheldon Steven to once again pull away and take the momentum from Co-Lin. The Wolves continued to trade scores on the offensive end but was unable to spark a run to cut into the Rockets lead. SAU held on and escaped a ruckus Mullen Gymnasium 89-78.

Heidelberg led the Wolves on Monday with 15 points after shooting 5-of-11 from the floor. The sophomore also led the team in assists with six. Darius Kent came off the bench to score 14 after shooting 100 (6-of-6) percent from the free throw stripe. Cameron Woodall finished with 12 points while Miles Daniels posted 11.

Sheldon Steven led the Rockets with 26 points after going 6-of-12 from three-point range, while McAllister-Boatright poured in 24 with six three’s as well. Jaland Mitchell led the Rockets on the boards with 12 and secured a double-double with 19 points.

For the sixth year in a row, the Copiah-Lincoln Community College Lady Wolves have won their second semester opener. The... read more