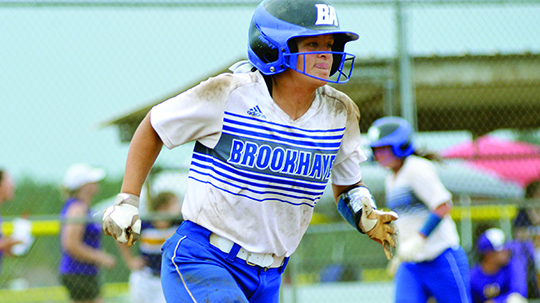 After the greatest season in school history the Brookhaven Academy Lady Cougars cleaned up on the recently released MAIS AA All-State Softball Team. The freshman trio of Madison Moak, Abby Grace Richardson, and Emily Claire Felder were selected along with the sophomore duo of Madi Smith and Abeni Fuller from BA. The Lady Cougars finished 37-5-1 and won the south state tournament before finishing state runner-up in the championship series.

Moak was the leadoff hitter for the Lady Cougars and played centerfield. She had a whopping 82 hits on the season and struck out only seven times. Moak finished with a .577 average at the plate and hit nine doubles and a team high 12 triples. She drove in 33 runs and scored a team high 70 runs herself.

“Madison is literally the spark plug at the top of our lineup,” said Lady Cougars coach Becky Flowers. “She’s a fierce competitor and can lay down a bunt or hit with line drive power. She runs like a deer and can cover gap to gap in the outfield.”

“Abby Grace has an amazing softball savvy about her,” said Flowers. “She has ridiculous arm strength for a freshman and hits with power to all fields. She’s such a fun athlete to watch and displays a true love for the game.”

Felder is a pitcher and outfielder. In the circle the nearly 6-foot Felder tossed a season high 125 innings and finished 19-3 in 30 appearances. Her ERA was 2.56 and she had 100 strikeouts. At the plate she hits six homeruns and drove in 23 runs in 106 at-bats.

“Emily Claire is a hard worker who uses speed and power along with her curveball to keep batters off balance,” said Flowers. “She’s an extremely hard worker and is so tenacious, which is an extremely important character trait for a pitcher. She also his some very timely home runs for us in the playoffs.”

“Madi has one of the best changeups in the MAIS and is very effective with it and her curve,” said Flowers. “She’s played varsity for five years and still has some great years ahead of her. She’s a great third baseman and swings a powerful bat.”

“Abeni is probably the glue that holds it together,” said Flowers. “She’s just a steady, strong player that doesn’t get easily flustered. She’s got a strong arm and is a safe zone for our pitchers.”

The Lady Cougars only had two seniors on their roster in Jana Case and Southwest Mississippi signee Morgan Smith. Flowers just completed her fifth season leading the Lady Cougars and began playing Smith and Fuller with the varsity when they were in sixth grade during her first season. She sees a bright future for her team as they look forward to beginning their next season in July of this year.

“These girls are all hard workers and great players,” said Flowers. “We can’t wait to get back on the field and keep working and improving as we get ready for next season.”

Here is a look at how area hoops teams came out on Tuesday night in high school action. West Lincoln... read more