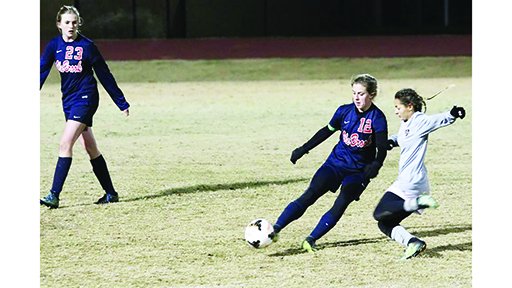 BHS senior Kat Wallace scored three goals on Tuesday in a 7-0 win over Wingfield. BHS plays their second to last regular season home game tonight when they host Forest Hill on King Field beginning with the girls match at 5:30 p.m.

Both Brookhaven High soccer teams have seen their seasons improve of late as the teams swept Wingfield in a region matchup on Tuesday. Tonight, the Panthers are back in region play as they host Forest Hill for matches that will go a long way in figuring the final divisional standings.

The Lady Panthers (4-7-1) have won three matches in a row including a pair of Region 6-5A victories over Natchez and Wingfield. In the win against Wingfield BHS got a pair of hat tricks from Madi Miller and Kat Wallace, as the duo combined to score six goals in a 7-0 win. The Lady Panthers also got a goal from Hannah Junkin and goal keeper Maddie Brabham pitched another shutout between the pipes.

“The girls played well,” said Lady Panther coach Kevin Bower. “We’ve improved a lot this season, both as individuals and as a team.”

Last season the Lady Panthers picked up 5-0 and 3-1 wins over Forest Hill as Brookhaven once again won the region with a perfect 6-0 record.

Against the Wingfield boys BHS (5-6-1) picked up a 1-0 win and it was some of the youngest Panthers on the team that stepped up in big ways.

“We played a hard-fought game,” said Panther head coach Aaron Ayers. “We had to replace some key players due to injuries and I am really proud of the way that the younger players stepped up and played.”

After tonight the Panthers will only have three regular season games remaining with another set of matches against their region foes. They’ll play at Natchez on Jan. 15, host senior night against Wingfield on Jan. 17, and finish the regular season at Forest Hill on Jan. 22.

After the greatest season in school history the Brookhaven Academy Lady Cougars cleaned up on the recently released MAIS AA... read more