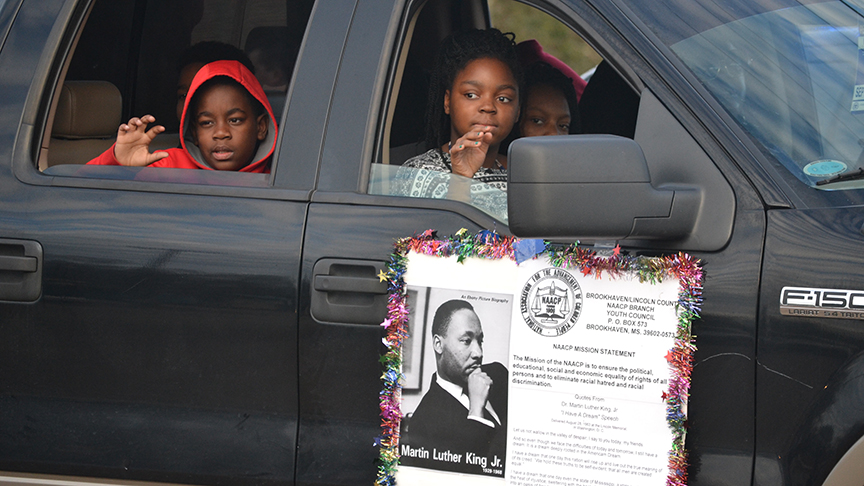 The bigger the better is Bernetta Character’s motto when it comes to putting on a parade.

Character, president of the Brookhaven/Lincoln County branch of the NAACP, is calling on all churches to participate in the 15th annual Dr. Martin Luther King Jr. Parade Sunday by entering with either a van, car or other vehicle of some type.

“After all, Dr. King was a pastor; and celebrating his birthday and representing with a vehicle in the parade would honor his memory,” she said. “Let us make this parade bigger and better this year.”

While Character is putting the word out to encourage churches to participate, she’s also making room for businesses, elected officials, schools, individuals and community organizations and clubs.

The entry fee for the parade is $5. All participants are asked to identify themselves in the parade with a sign. Candy cannot be thrown during the parade due to safety concerns, she said.

The parade was originally started by Rose “Polly” Powell. The NAACP chapter took it over in 2011 and has been in charge ever since.

Character does not want people to forget their history. The parade is a time to celebrate the men and women who paved the way for African Americans in Brookhaven, much like King did for the nation. Character marched with the civil rights activist when she lived in Chicago. The first time was when she was about 12 or 13. Then at 17, she marched with King to Soldier Field in 1966 to hear him take on Chicago Mayor Richard J. Daley and others over open housing for African Americans.

Lineup for the parade begins at 3 p.m. in front of Williams Mortuary on East Minnesota and South First streets. The parade will end at Alexander Jr. High School. Rev. Eugene and Cora Edwards are the grand marshals this year.