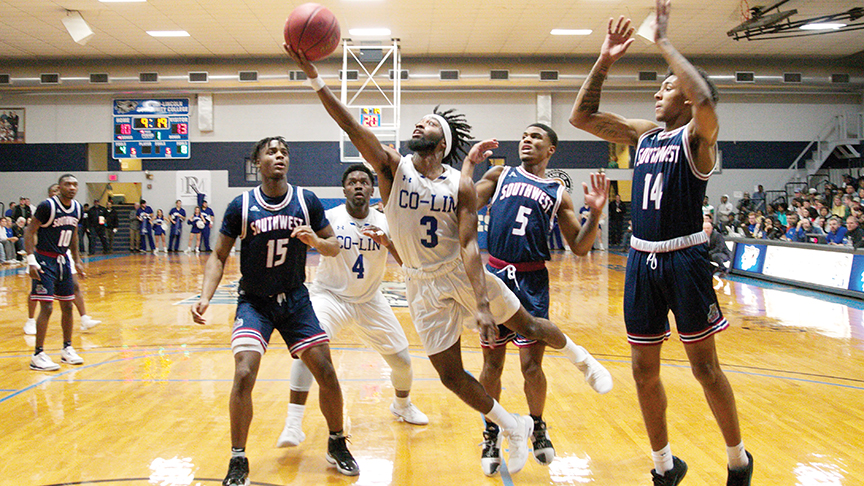 Brooks scored 22 points, while Daniels posted a team-high 29 after shooting 7-of-10 from three-point range. The win improves Co-Lin to 9-4 on the year and to 2-2 in MACJC play and drops the Bears to 10-3 overall and 2-2 in league play. Co-Lin is on the road Tuesday and Thursday with games at Hinds and Meridian but is back in Mullen Gymnasium on Jan. 28 as they host the Jones College Bobcats.

“It was a great game, I’m really proud of our guys for taking a defensive game plan and executing really well,” said head coach Kenny Bizot. “Miles Daniels played like I know he’s capable of playing, and Damarius did an unbelievable job breaking the defense down…I’m just happy for our guys, we’ve been working hard and trying to figure some things and tonight it finally came together.”

The action was tight early in the contest before the Bears went on a 5-1 run after a big three-pointer from Artutto Bingham. The offensive momentum gave Southwest a six-point, 13-7, lead just eight minutes into the game. Co-Lin rallied back just five minutes later with a 12-2 run. The ten-point swing came from Craig Philip, a three-pointer from Brooks, and a shifty layup from Xavier Heidelberg. The run put the Wolves on top for the first time and with 7:38 left in the first half Co-Lin led 19-15.

The Bears quickly rattled home five points off a TJ Ben three and a layup from Jay Malone, but the short-lived, one point lead proved to be Southwest’s last lead of the game. Daniels scored seven straight points in the final minute of the opening half off a layup, a huge dunk after a steal, and a three-pointer that got the crowd in Mullen Gymnasium on their feet. Going into the locker room the Wolves were up by six, 34-28.

The second half was all Co-Lin as the Wolves poured in 52 points, the second most in one half this season. Southwest chipped away at Co-Lin’s lead early and cut the Wolves’ lead to two, 36-34, but great free throw shooting and a three-pointer from Daniels pulled the lead back into double digits. With just nine minutes remaining the Wolves had grown that lead to 17, 65-48. The Wolves didn’t let up as the offense continued to nail shots from beyond the arc and capitalize on every trip to the foul stripe. Co-Lin’s largest lead came after yet another Daniels three-pointer with 4:50 left in the game. The high arcing shot stretched the lead to 22, 82-60. Co-Lin held on to that lead in the final minutes and left Mullen with an 86-69 victory.

Daniels finished the night 9-of-12 from the floor with seven three-pointers for 29 points, while Brooks finished with 22 after shooting 8-of-13 from the floor. Cameron Woodall posted nine points and led Co-Lin with nine rebounds, while Heidelberg scored nine.

Jay Malone led Southwest with 25 points while Bob Boyde finished with eight. Lincoln Smith led the Bears on the boards with eight.