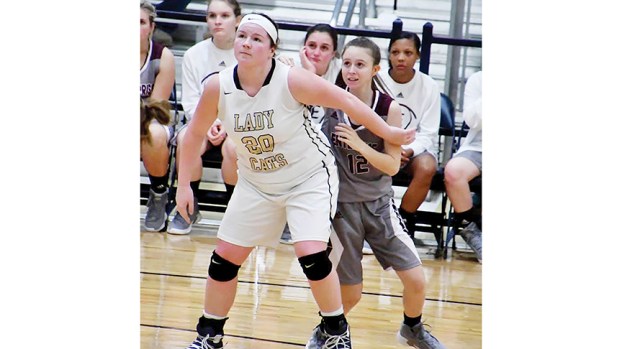 Although the Lady Bobcats started the game off slow, they would pick up the pace behind their defense as they began to take control of the game. The Lady Yellow Jackets struggled to get their shots to fall.

“We played a lot better as a team and communicated better,” Lady Bobcats senior Karly Leake said. “We worked on defensive pressure during practice and that helped us out in the game.”

With the game tied 2-2, the Lady Bobcats would roll for an eight-point run before Lady Yellow Jackets freshman Natalie Harris would sink a three-pointer to stop the run.

The Lady Bobcats led 13-8 heading into the second quarter.

The Lady Bobcats would outshoot the Lady Yellow Jackets by a slim 7-6 in the second quarter to take a 25-12 lead into halftime.

Coming out of halftime, the Lady Bobcats would roll on a 13-point run before Lady Yellow Jackets freshman Alexandra McGee could put her team on the board.

“We played really good as a team,” Lady Bobcats Kamilah Clay said. “We were able to get the ball inside for shots, and if those shots weren’t available, we moved the ball outside for shots. We had a lot of defensive pressure. Even the young kids came in and did what they had to do.”

The Lady Bobcats held a 43-14 lead heading into the fourth.

With the Lady Bobcats up, coach Robby Walters started emptying his beach with under four minutes left in play.

Enterprise takes a break from region action tonight as they host Pisgah and Bogue Chitto is on the road tonight at West Lincoln.

The Bogue Chitto Bobcats (5-16, 1-2) snapped a four-game losing streak on Friday night and picked up their first Region... read more