Lady Wolves improve to 13-1 with win over Lady Bulldogs 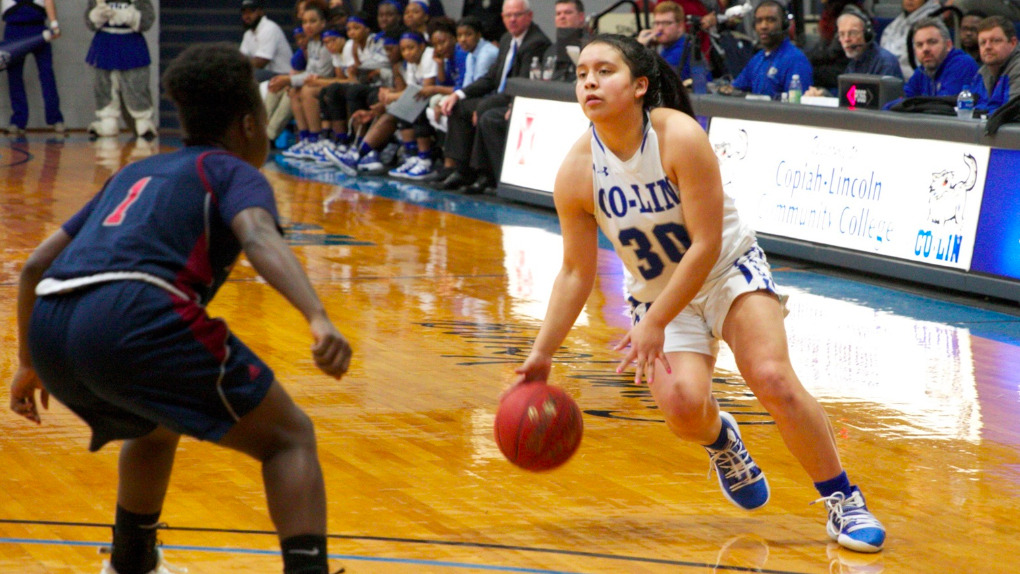 Freshman guard Darien Tubby handed out 10 assists for the Co-Lin Lady Wolves in their 70-52 win over Hinds in Utica on Tuesday night. Co-Lin takes on the Meridian Lady Eagles on the road Thursday night.

The Copiah-Lincoln Community College Lady Wolves took a five-game win streak on the road on Tuesday and left J.D. Boyd Gymnasium in Utica with a 70-52 win over Hinds. The sixth win of the streak improves Co-Lin to 13-1 overall and to 4-1 in the MACJC South Division and places the Lady Wolves in sole possession of second place in division play. The Lady Bulldogs of Hinds fell to 5-8, 1-5. Co-Lin is on the road again Thursday as the team travels to Meridian to take on the Lady Eagles.

“Anytime you can get a conference win on the road, it’s a plus,” said head coach Gwyn Young. “It wasn’t pretty, but we did a good job rebounding the ball and kept their shooting percentage down. We did pretty good overall, especially on defense in the first half, but we just have to get more consistent offensively.”

The Lady Wolves could not have asked for a better start as Co-Lin poured in four unanswered layups in the first three minutes to lead 8-0. Hinds finally broke the streak with a three-pointer from Victoria Johnson. The Lady Bulldogs cut the lead to two, 8-6, a couple of minutes later, but Co-Lin fired off another run to pull away yet again. The 9-0 offensive spurt put the Lady Wolves on top 17-6 with just two minutes left in the first quarter.

The second quarter was much of the same as Co-Lin played lockdown defense and controlled the boards on both ends of the floor. The lead grew throughout the quarter with an impressive stint in the final two minutes as Sha’Quandra Carter scored six straight for the Lady Wolves. Going into the locker room Co-Lin led 36-20 and had held the Lady Bulldogs to just 19 percent shooting from the floor.

The third and fourth quarters slowed down for the Lady Wolves as the team scored 17 points in each, but Hinds’ Victoria Johnson began hitting several three-pointers. Despite the desperation heaves from Johnson the Lady Wolves held on the lead and stretched it to a game-high 22, 57-35, with seven minutes left in the contest.

Co-Lin kept up the intensity and effort in the final minutes and finished the game on a 9-4 run to solidify the 70-52 victory.

Sha’Quandra Carter led the Lady Wolves with a double-double, her second of the year. Carter scored 14 on 7-of-13 shooting and grabbed 11 rebounds. Camryn Davis had a stellar game as she scored 11 and brought down nine rebounds. T’Kyra Hicks added 12 points, while Darien Tubby led the team with 10 assists. Alexandria Patton was Co-Lin’s leading scorer off the bench as she scored nine.

Victoria Johnson led Hinds with 32 points after shooting 11-of-33 from the floor and 7-of-19 from three-point range. Chloe Jones was next for the Lady Bulldogs with six points and Nakaylis Washington led the team with seven rebounds.