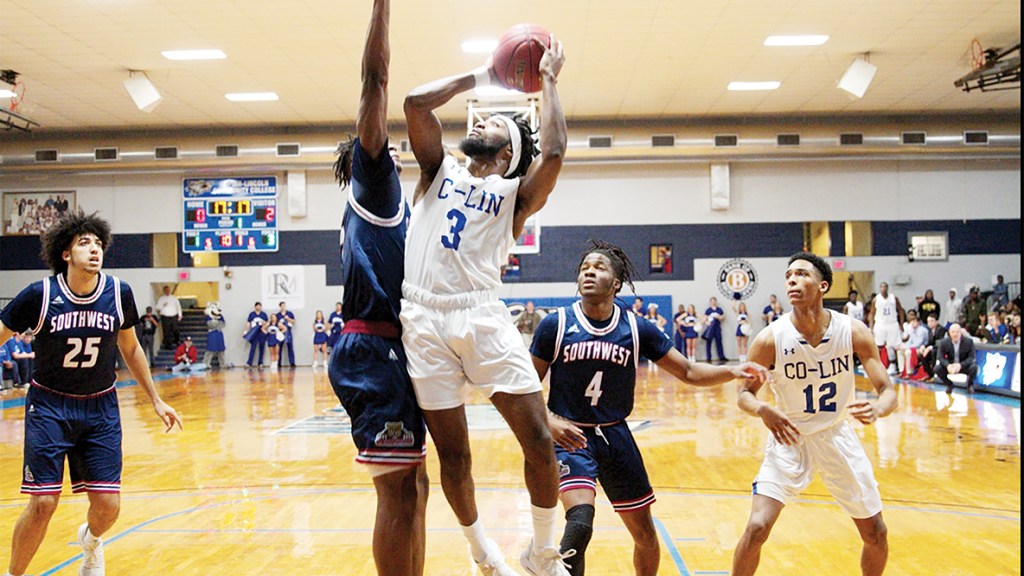 The Copiah-Lincoln Community College Wolves took their first lead with just 2:20 left in the game on Thursday after overcoming a 10-point deficit.

The late push lifted the Wolves to a 68-63 win over the Meridian Eagles. The win improves Co-Lin to 10-5 on the year and to 3-3 in the MACJC South Division, while Meridian drops to 7-4, 2-4. Co-Lin is now in sole possession of fourth place in the division and faces the first and second place teams this week at home in Jones County and No. 9 Pearl River Community College on Monday and Thursday.

“I’m extremely proud of our men,” said head coach Kenny Bizot. “We were engaged in the game tonight, a totally different game from Tuesday. When it mattered most we made our free throws…we missed a lot of layups early on, but we were a lot more aggressive tonight. We need everybody next week, we need our crowd to be as big and as loud as we’ve ever had it this week to keep the intensity up.”

After a three-pointer from Meridian’s Kylan Hamilton, the Eagles took a seven-point 13-6 lead in the first half. Co-Lin quickly rallied from that deficit with a 7-0 run with layups from Craig Philip, Damarius Brooks, and Lance Madison. The swing tied the game for the first time at 13-all. Meridian turned the game around as the momentum pendulum swung back into the Eagles favor. Three three-pointers over the next six minutes stretched the Eagles lead to a game-high 10, with 4:41 remaining until the half.

The Wolves prevented the Eagles from running away with the game by driving into the paint and making layups. The Wolves earned several trips to the free throw line early on but struggled to hit the free shots. Co-Lin’ Lazorian McNulty hit a three with 1:05 left in the first half, the final basket of the half, to cut the Eagles lead to seven, 34-27, going into the locker room.

Co-Lin continued their aggressive play in the second half as the team limited three-point attempts, normally a staple of the offense, and drove to the rim. The strategy paid off as the Wolves began to chip away at the Eagles lead over the first 10 minutes of the second half. Midway through the half, the Wolves went on a 7-0 run to cut Meridian’s lead to just one, 50-49.

Late in the game, Co-Lin finally found their rhythm at the free throw stripe. Cameron Woodall knocked down a pair of free throws to tie the game at 56, just the third tie of the game, with 2:49 remaining. Co-Lin followed with back-to-back layups from Xavier Heidelberg and Miles Daniels to take a 60-56 lead. Meridian cut the lead to two with a layup on the other end with just 1:08 remaining, but Lazorian McNulty stretched Co-Lin’s lead back to five with a huge three with just 46 seconds on the clock. The five-point lead forced Meridian to start fouling the Wolves who were stellar at the stripe over the final minute.

Damarius Brooks led Co-Lin with 17 points after shooting 7-of-12 from the floor and 2-of-4 from beyond the arc. Xavier Heidelberg finished with nine point and nine rebounds, while Cameron Woodall added nine.