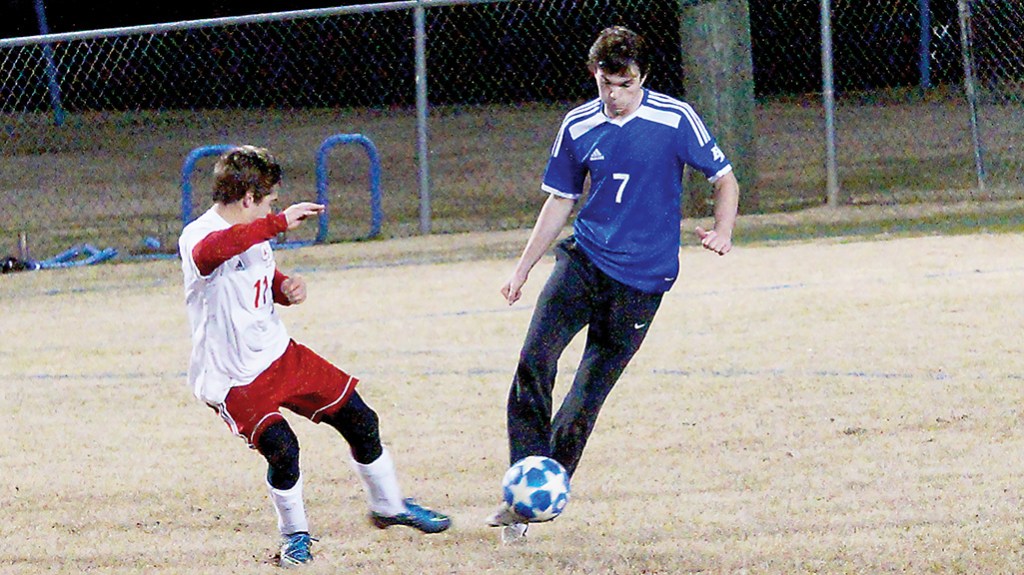 Photo submitted Brookhaven Academy senior Keegan Smith led the Cougar offense with two goals on Monday night against Laurel Christian. Smith and the Cougars went to overtime tied 3-3 with Laurel Christian and the Lions won the match after an overtime period and two rounds of shootouts.

It took two regulation periods, overtime, and two shootouts — but in the end it was the Laurel Christian Lions who escaped the grasp of Brookhaven Academy on Monday night in soccer action after the match ended tied 3-3.

“This loss hurt bad,” Cougars coach Clint Rounsaville said. “We got up 2-0 early and kind of got lazy. Our execution wasn’t very good. Overall, I’m proud of the boys and their effort as they never quit fighting. The loss didn’t knock us out of the playoffs but does diminish our chances of making it.”

BA would eventually press the ball down the field and past the Lions defenders.

The Cougars would score the game’s first goal off the foot of freshman midfielder Logan Alexander.

BA would score once more as senior forward Keegan Smith booted the ball in for a goal.

The Lions would avoid a first half shutout by scoring off a penalty kick.

The Cougars led 2-1 heading into halftime.

As the second half kicked off, BA struggled to keep Laurel out of their backfield.

The Cougars eventually were able to force the ball out of their backfield and down the field.

Smith would score his second goal of the game to add onto the lead.

The Lions would close up the gap as they would score a goal past a sliding BA goal keeper.

The Lions would eventually tie up the game at 3-3 in the second period.

With time running out in regulation, both teams pressed the ball but were unable to keep the game from going to overtime.

Overtime ended up being fruitless and neither team could sustain their offensive attack in the period long enough to score a golden goal.

With the game still tied at the end of overtime, both teams prepared for a shootout.

Both teams would score three goals out of five to force a second shootout.

Laurel Christian would win the game in the second shootout, making four of their goals to the Cougars two.

Brookhaven Academy next plays at home Friday when they host Porter’s Chapel.