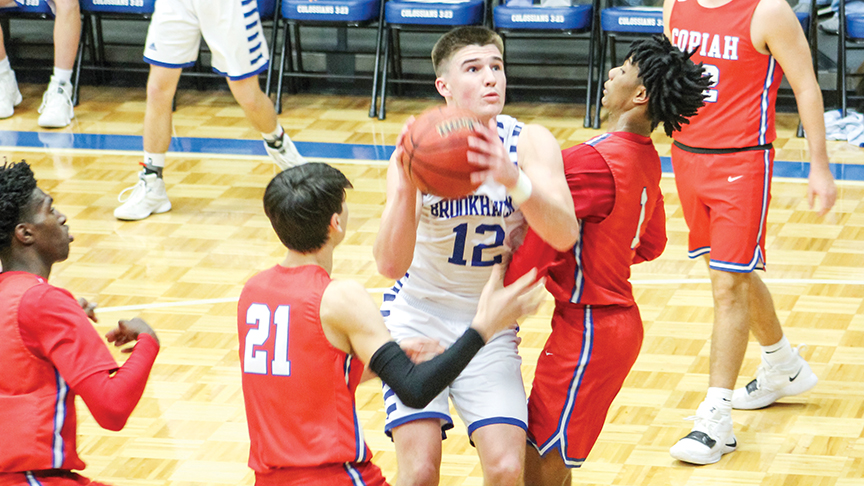 Photo by Emily Phillips Brookhaven Academy forward Dawson Flowers powers up towards the goal on Friday against Copiah Academy. A senior, Flowers scored 23 points in a 59-57 win in the regular season finale. BA moves on to the district tournament that takes place this week at Newton County Academy.

The Brookhaven Academy Cougars wrapped up regular season play on Friday with a sweep of the visiting Copiah Academy Colonels. In the girls’ game the Lady Cougars (21-6) took a 56-43 win over CA. The boys’ game was tight throughout with the Cougars (24-3) holding on for a 59-57 victory.

The senior night festivities for the Lady Cougars began with recognition of the senior trio of Kristian Diamond, Macy Grace Smith and Jane Case. All three drew the start as BA looked to sweep the season series with the Lady Colonels.

“I think we had a great effort and excellent attitude toward tonight’s senior night,” said Diamond. “Having won against them last time we definitely knew what we had to do tonight.”

The Lady Cougars had a somewhat diverse strategy on the defensive side of the ball as they hopped back and forth between a zone defense to a full court man-to-man press that took away all of the Copiah momentum and earned points from fast breaks and stolen passes. A large percentage of their offense came from this game plan by the Lady Cougars.

“I think we played great tonight,” said Smith. “Senior night brings an extra added pressure, but we all played together.”

“We didn’t lay back and put them away early,” said Case. “We knew it would be a tough game and I think we played good.”

The boys’ game was filled with subplots and story lines. The senior foursome of Sean Beard, Tanner Thurman, Cade Brown and Dawson Flowers were honored before the game. Back on Nov. 27 the Colonels beat BA 46-45 in a game that the Cougars played without Brown and Flowers as they were at the MAIS football all-star game. Also add in the fact that Flowers’ older brother, Drake, is a first-year assistant on the Colonel coaching staff and you had the Cougars closing out the regular season with a fun game.

The Cougars led 34-32 at halftime and used the strong inside play of their senior forwards, Flowers and Brown, to take the tight win.

“Early on we played a little tight,” said Flowers. “Later on, we did loosen up and played our game and it showed in the end.”

Thurman agrees with his classmate that the Cougars came out with some nerves.

“Our shots started to fall after we loosened up,” said Thurman.

“It was a fun night and I think we played great,” said Beard.

The fun night was the final regular season contest as the Cougars now focus on the MAIS District 3-AA tournament this week at Newton County Academy in Decatur.

The Lady Cougars play on Thursday at 4 p.m. in a semifinal game against a yet to be determined opponent. The boys’ team will play immediately following the girls’ game. Both teams are top seeds in the tournament with identical 8-0 records in regular season district play.

The Cougars will host the south state tournament next week in John R. Gray Gymnasium.