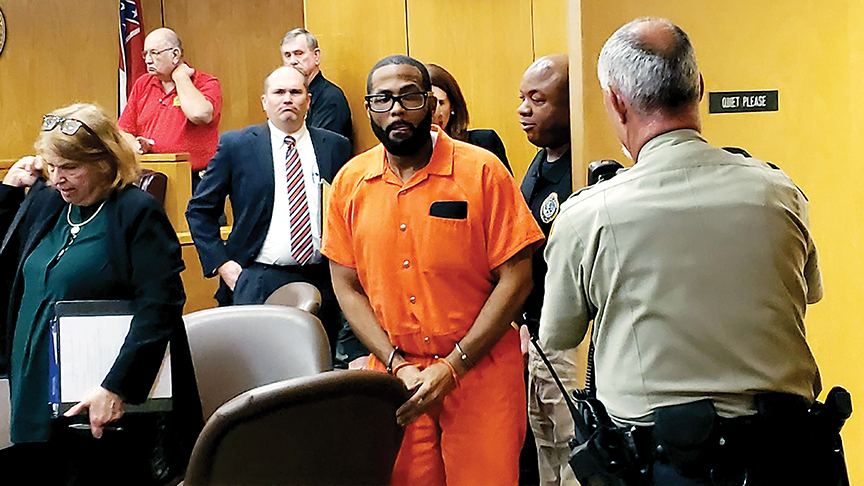 Photo by Donna Campbell Capital murder suspect Willie Cory Godbolt leaves Lincoln County Circuit Court Tuesday after a judge denied his attorney’s motion to allow Godbolt to wear civilian clothes in the courtroom for all hearings as well as to be unshackled in the courtroom.

A Lincoln County judge ruled Tuesday that capital murder suspect Willie Cory Godbolt will remain in an orange Copiah County Detention Center jumpsuit and wear shackles for all hearings leading up to his trial, wherever that may be held.

Judge David Strong suggested during a 20-minute motion hearing to decide Godbolt’s courtroom attire that the eventual trial may not be held in Lincoln County.

“He can’t get a fair trial in Lincoln County, Mississippi,” Strong said. “Obviously, the case is going to be moved. It will have to stay in Mississippi but it’s going to be about as geographically far from here as you can get.”

However, a motion for a change of venue was not on the agenda Tuesday. When it does come up, the judge will likely have two choices — have the trial in Lincoln County and bring in an outside jury or move the trial to another location.

Lead attorney Alison Steiner, one of his public defenders, requested he be allowed to change into civilian clothes before entering the courtroom for all pre-trial hearings because she doesn’t want potential jurors to see images of him in a jail jumpsuit, where their “only picture is this big orange object in shackles,” she said.

She said Godbolt “is entitled not to have jurors have this image of someone who is not presumed innocent.”

She said Godbolt’s behavior doesn’t warrant the use of shackles on his wrists and ankles in the courtroom.

“His behavior in the courtroom and everywhere else has always been exemplary,” she said.

Assistant District Attorney Brendon Adams countered that with several instances of Godbolt’s unruly behavior and one attempt at an escape since he’s been in the CCDC.

Adams said that same month he was electronically shocked by a corrections officer because of his behavior; in Nov. 14, 2017, Godbolt punched a television, ripped a television off the wall and hit a telephone; and in September 2018 he displayed disruptive behavior.

Godbolt has already been photographed at numerous hearings in the jail jumpsuit, he said.

“Jurors have already seen all the images,” Adams said. “They can’t unsee an image of him already wearing orange. He’s already been in front of the camera. Those images are out there. We can’t take any of those back.”

Adams said the state’s main concern is security and Godbolt should continue to wear the identifiable orange jumpsuit and the shackles when in the courthouse — including the courtroom — because he has been charged with “very serious crimes” and could be a danger to himself and others. He said his past behavior in Copiah County’s jail shows he’s a risk and a security issue.

The state is not requesting he wear the jumpsuit and shackles during the capital murder trial.

“Mr. Godbolt’s performance would have to be extremely poor for him to ever be shackled or not in civilian attire in front of a jury, I can promise you,” Strong told Steiner.

Strong said he doesn’t care which of the Jackson television stations are selected for the video pool.

Though the deadline had passed, Adams suggested the state planned to re-request a psychological evaluation for Godbolt “due to some recent events.” He did not give details for the request.

Strong said he’d rule on that motion in an upcoming hearing.

Godbolt’s next appearance in Lincoln County will be Feb. 22 at which time Strong will hear motions concerning jury selection methods, severing the multi-count indictment, change of venue, emotional outbursts in the courtroom, uniformed police presence around jurors, avoidance of memorial tributes to fallen officers and a motion to keep the death penalty off the table if Godbolt is convicted.