Bobcats power past Jackets into semis 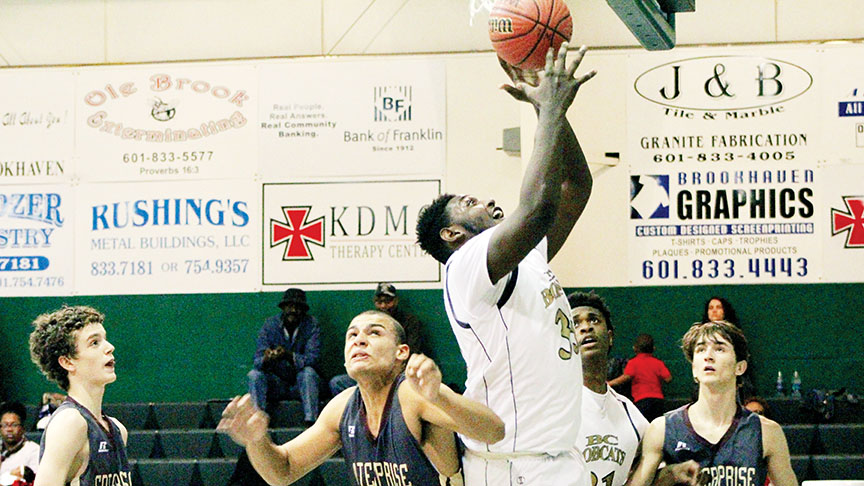 Photo by Cliff Furr Bogue Chitto senior forward Malik Richarson goes up with an offensive rebound against the Enterprise defense on Tuesday night at Bogue Chitto. Richarson scored 10 points as the Bobcats moved on to face Loyd Star tonight in the region semifinals at 5:30 p.m.

The Bogue Chitto Bobcats (7-20) built a 25-14 halftime lead and never looked back on their way to a 53-41 win over Enterprise (4-19) on Tuesday night in the opening round of the Region 7-2A tournament at West Lincoln.

Up next for head coach Marvin McGee and his team is a semifinal game against No. 1 seed Loyd Star (17-9) tonight at 5:30 p.m. The Bobcats have not played Loyd Star since BC got a core group of senior players back eligible after missing nearly the entire season.

On Tuesday those seniors were a big part of the Bobcat success as guard Brandon Lewis scored 13 points and forward Malik Richarson added 10 points. Richarson, Lewis, Zach Upkins, Darius Porter and Warrick Cook helped control the boards as Enterprise had to settle for only one shot per possession all night.

“We’re still coming together as a team,” said McGee. “I’ve got so many options of who can play where and it’s different guys stepping up each game. The thing I’m happiest about is no one is complaining, everyone just wants for the team to win.”

Enterprise did cut the BC lead to 39-33 with six minutes remaining in the game on a Peytin Jergins 3-pointer, but EAC would get no closer.

Junior forward Josh Thomas, the leading scorer for the BC team all season, scored eight points in the final quarter to push his team back out to the late lead.

Thomas finished the night with 13 points and scored six straight points off powerful slams after the Jergins 3-pointer. The second dunk — off the dribble and in a crowded lane of defenders — may have cemented Thomas as the best flyer in the region.

The Jackets began the season hot as they won three of their first four games. EAC lost twice in OT during the season and had five total losses come by 10 or less points.
Adams was proud of the fight shown by his team.

“My guys played hard, we just didn’t hit shots tonight,” said Adams. “We kept it close early, but eventually their size hurt us on the boards.”

The final tournament game of the session begins at 8:30 p.m. tonight when West Lincoln takes on Amite County in the other boys’ semifinal.

Coach Brooks Smith and his crew split their regular season matchups with Amite County with both teams winning on their home court. WL defeated ACHS 69-60 in Flea Hop before losing 51-42 in Liberty.

The matchup is between two teams that aren’t afraid to pull it from deep. Junior Karlton Byrd leads the Bears with 16.7 points per game. Senior sniper Garrison Coffey adds 13.4 points per game and junior point guard Anthony “Peanut” Hughes is good for 8.3 points an outing.

The difference in the teams is what WL has in the middle in 6-foot-4 junior forward Keshon Byrd. If Byrd can control the paint, Amite County does not have an answer for his size inside. Byrd is currently averaging 11.2 points and 8.2 rebounds per game for the green and white.

The winners of tonight’s games move on to the championship on Friday while the losers will play in the earlier consolation game.