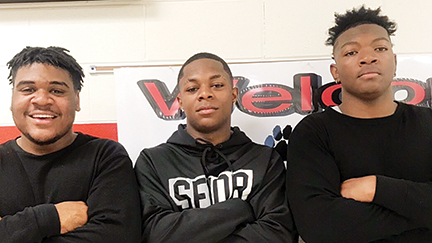 The Bears are getting the top tackler on the 2018 Lawrence County team in linebacker Jeremiah Sumrall. Sumrall made a team high 54 solo tackles on his way to a total of 77 stops as a senior. A 6-foot-1, 235-pound athlete, Sumrall was a major part of a Cougar defense that pitched three shutouts during his senior season.

Sumrall plans to major in business administration. He liked how the Southwest coaching staff started calling on him early in the season and stuck with him throughout the year.

“The Southwest coaches were consistent in recruiting me,” said Sumrall. “They were honest with me and plan to keep me at linebacker. I impressed them with how well I move and how I play the position from sideline to sideline.”

Southwest also signed safety Jerome Dudley off the Cougar roster. Dudley was a force in the backline of the LC defense as he picked off four passes, recovered a fumble, broke up eight passes, and blocked a punt. The 6-foot, 180-pound Dudley was a quarterback as a junior before making a full-time switch to defense as a senior.

Dudley says the Bear coaching staff wants to keep him at free safety. He plans on majoring in diesel mechanics.

“After visiting I really liked how the overall program runs there,” said Dudley. “They just want me to come in and do the same things down there that I’ve done for my high school team.”

Avousier “Juice” Kelly will be making a position switch when he gets to Summit. Kelly was a standout offensive lineman and a part-time defensive lineman as a senior for coach Jesse Anderson and his staff. At Southwest Kelly will play either defensive end or outside linebacker. The 6-foot-3, 230-pound Kelly picked Southwest over an offer from Holmes.

Kelly plans on majoring in electrical technology and playing wherever his new coaches see him best helping the team.

“The coaching staff there saw something in me that no one else did,” said Kelly. “They were willing to offer me as a defensive player because of how aggressive I play. They really tried to get to know my family and cared about my academics because that’s my main focus. I know football won’t last forever.”

The trio were a big part of LC going from 3-8 their junior season to 7-5 as seniors in Anderson’s first campaign as head coach.