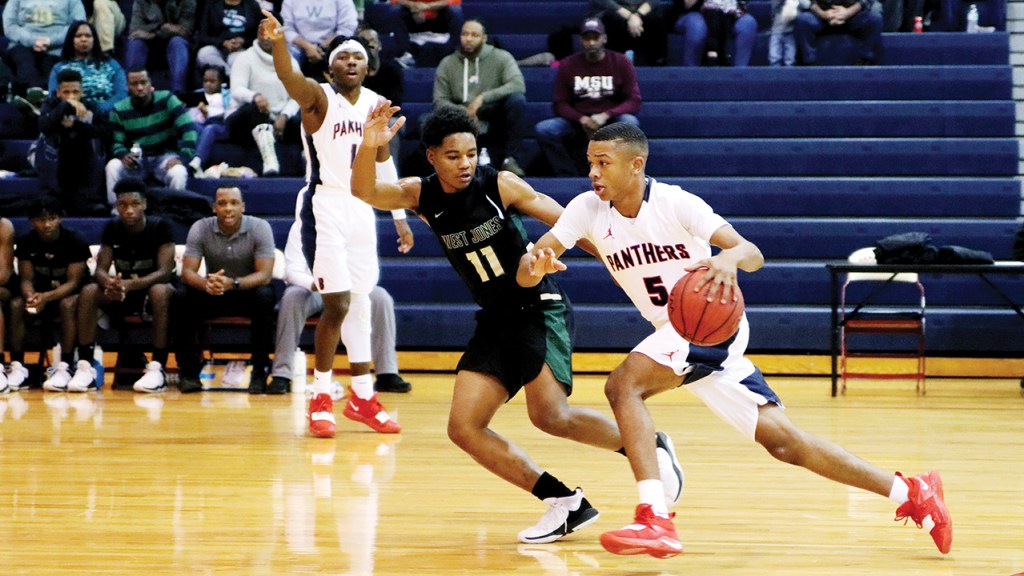 Photo by Becky Green Brookhaven High sophomore point guard La’Darius Thrasher drives into the West Jones defense on Tuesday night in Sinclair Gymnasium. The Panthers are on the road tonight for a second round playoff matchup at Long Beach High School. Tip off is scheduled for 7 p.m.

It will be a quick turnaround for Brookhaven High School coach Marcus Flippin and his team as the Panthers travel to the Gulf Coast Thursday night for a 7 p.m. matchup with the Long Beach Bearcats (23-6). The MHSAA 5A tournament second round game comes on the heels of BHS handling their first-round opponent — West Jones — by an 80-64 score on Tuesday night in Sinclair Gymnasium.

The Panthers (21-7) had two objectives during their game against West Jones (9-19) —use defensive pressure to slow down the speedy Mustangs and attack the rim offensively. BHS was 2-for-2 on those goals after dictating the pace all game long.

“We wanted to attack the rim tonight,” Panthers senior John Hilbert said. “We also wanted to play solid defense. We did alright tonight, but we have a lot that we can work on.”

After missing their opening shots, the Panthers finally scored as senior forward Lafollettte Bogan would knock down a jumper to put BHS on the board.

The Panthers saw their 6-2 lead shrink with 1:58 left in the first, as WJ sophomore forward Dylan Page hit both of his free throws.

Those two free throws were the last points West Jones would score in the first, as Brookhaven led 10-4 heading into the second quarter.

The Mustangs turned up their own defense as they attempted to climb back into the game but were unable to match points with a red-hot Panther offense.

With the Panthers pulling away from the Mustangs in the second half, emotions on both teams started to flare up.

The officials had to step in and issue both teams technical fouls as they attempted to keep both the game and players under control.

The Panthers were up 58-34 heading into the final quarter of action.

With the game well in hand, Flippin subbed in his bench for some playing time, a move that West Jones took advantage of.

The Mustangs started pressing on both sides of the court as they started to mount a comeback, forcing Flippin to sub in a couple of his starters back into the game.

The Panthers quickly regained control of the game and put an end to West Jones’ comeback.

“It was good to get the win in the first round of the playoffs, considering last season we didn’t win a division game,” said Flippin. “This year we ended region runners up and came in second place in the tournament which gave us the chance to host this game. The guys will get some rest tomorrow and we’ll see what we can do against Long Beach on Thursday. The boys played hard tonight, and everyone got a chance to get in, which is always good.”