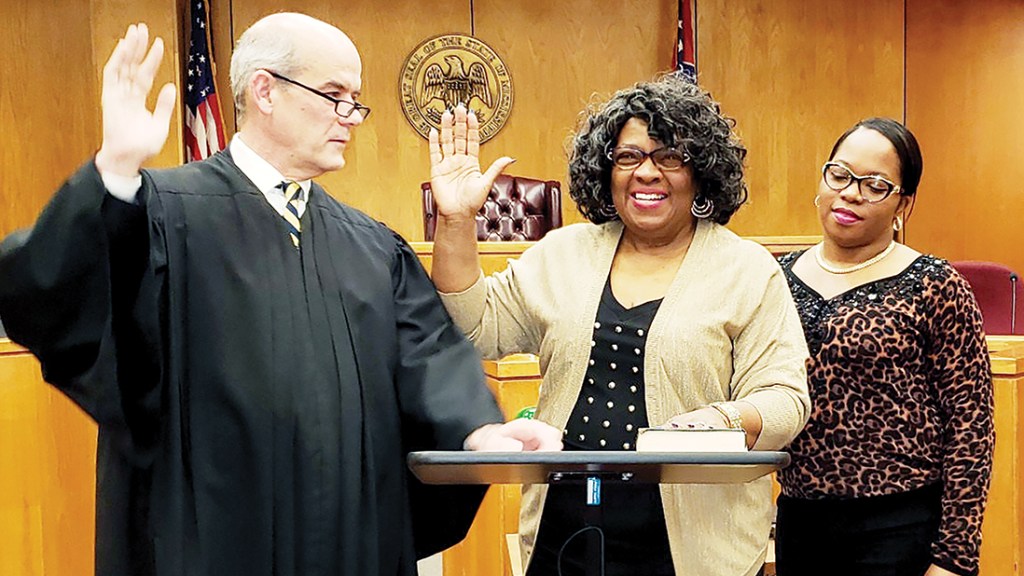 With her daughter, Jennifer, by her side, Beverly Williams Howard took an oath of office Wednesday morning to serve on the Lincoln County Election Commission to replace a retiring member.

Howard, who will represent District 1, was appointed Tuesday by Lincoln County supervisors to replace James Tillman.

Tillman, who serves on the Brookhaven School District Board of Trustees, resigned Feb. 15. Supervisors were made aware of it Tuesday during their meeting when Lincoln County Circuit Clerk Dustin Bairfield recommended Howard.

Bairfield said the Secretary of State’s office sent word that supervisors needed to accept Tillman’s recommendation, appoint a new commissioner and then set a special election for Nov. 5.

District 3 Supervisor Nolan Williamson was concerned the board was making a hasty decision.

“Did anybody ask about that job?” he said.

“Yes, we’ve already got somebody,” said Rev. Jerry Wilson, supervisor for District 1 and board president.

Howard will serve as the election commission appointee until January. A special election is set for Nov. 5 and that person will serve a four-year term.

“Are we appointing this person this quick? I mean, no one else knows about it,” he said. “I’m not saying this woman’s not qualified but are we allowed to appoint that quick?”

Bairfield said the board was following the instructions of the secretary of state.

“He (Tillman) made a recommendation he wanted me to pass on to y’all. I believe she would be good for it,” he said.

Qualifying for the District 1 election commissioner post runs Aug. 7 to Sept. 6. Forms are available in the circuit clerk’s office.

They work to ensure the voter rolls for Lincoln County are clean by removing those voters who have moved or died.

The election commission is responsible for ensuring that all elections are conducted fairly, honestly and legally in all areas of the laws of the state. They are responsible for testing and preparing voting machines and ballot encoders for the election, and preparing poll books. They compile precinct results on Election Day, certify election results and provide election data to the public.

Members of the election commission are elected officials who serve a four-year term and there are no limitations to the number of consecutive terms that can be served. Commissioners must be qualified electors in Lincoln County and a resident of the supervisor district in which they are a candidate.

Commissioners are required to attend annual training conducted by the Mississippi Secretary of State’s Office to be certified to conduct elections.