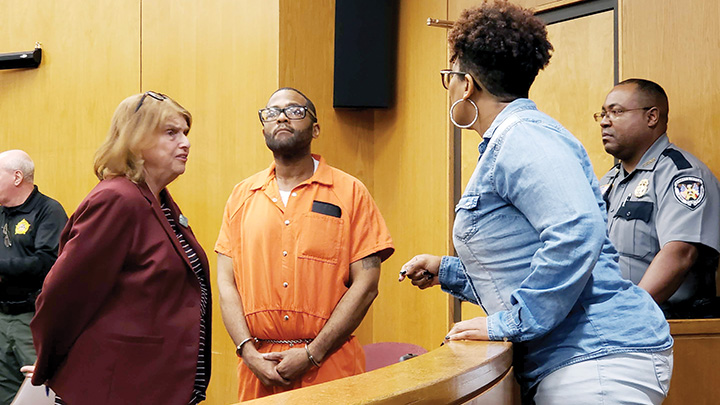 The trial for a Bogue Chitto man accused of murdering eight people including a sheriff’s deputy and two children will take place in Lincoln County less than a year from now.

A jury bused to Brookhaven from DeSoto County will hear the case of Willie Cory Godbolt, 36, who was indicted on four counts of capital murder, four counts of first degree murder, one count of attempted murder, two counts of kidnapping and one count of armed robbery, for crimes he allegedly committed during a seven-hour rampage starting just before midnight May 27, 2017.

He pleaded not guilty and has been jailed in Copiah County without bond since his surrender to police the morning of May 28 near the third murder scene.

Lincoln County Circuit Court Judge David Strong Friday tentatively set Godbolt’s trial for Feb. 10, 2020. He also ordered the trial be held in Lincoln County in the circuit courtroom upstairs at the Brookhaven-Lincoln County Government Complex unless he decided it should be moved to Pike County’s courthouse due to limited seating available in Brookhaven.

“The court, after all this research, is going to transfer venue for this case to DeSoto County Mississippi where a jury will be picked sequestered and bussed back to Lincoln County,” Strong said. “The jury will not be exposed to people who might say untold things to them even if they have to go eat lunch and dinner at the hotel they’re going to be in here. We’re going to bring the jury here to try the case.”

Godbolt appeared at the hearing looking much thinner than he did at the time of his arrest nearly two years ago. He wore an orange Copiah County Jail jumpsuit with shackles at his waist and ankles along with a second set of orange handcuffs.

Defense attorney Alison Steiner asked that the handcuffs binding his wrist together be removed so her client could drink water and take notes. Since that still left Godbolt’s hands shackled to the waist chains, Strong allowed it. Four deputies stood against the wall behind Godbolt’s chair, two from Lincoln County and two from Copiah County, where the defendant has been housed since his arrest.

Godbolt spent most of the two-hour hearing rocking silently in his chair where he was seated between Steiner and Lincoln County public defender Jason Tate.

The courtroom that seats about 60 was nearly full, mostly with victims’ friends and family.

Shelly Godbolt Porter, the defendant’s sister, spoke to Godbolt briefly during a 15-minute recess. She said after the hearing that she doesn’t condone her brother’s alleged actions. Several of those killed were related to her as well.

“I’m not here to support his actions. I’m just here to be here with my family, because they’re my family as well,” she said. “My mom and dad (both deceased) would want me here.”

During the hearing, Steiner presented more than two dozen motions dealing with everything from wearing ankle shock bracelets during the trial to a 24-hour cooling off period before sentencing if the jury comes back with a guilty verdict on any of the 12-counts against Godbolt.

Steiner is concerned the “intense publicity” locally will prevent her client from receiving a fair trial.

Tate argued that if a jury is brought to Lincoln County it’s likely “they will run into people with emotional ties” who have the “potential of making a juror feel uncomfortable.”

Tate and Steiner are also concerned with the size of the courtroom. The four rows of 15 seats is reduced to just three rows during a jury trial. The row closest to the jury box is kept empty.

Steiner made a motion to ask that the family of the victims refrain from showing emotion that could impact the jury’s decision.

“If some member of the audience is out there showing emotions to the extent that it interrupts the proceedings, that it causes undo attention to them, then they’ll have to step out of the courtroom,” Strong said.

Strong also ruled that law enforcement officers won’t be allowed to wear memorial black bands on their badges in the courthouse and no memorials will be allowed on courthouse grounds during the trial.