Lady Wolves lose to No. 13 Jones 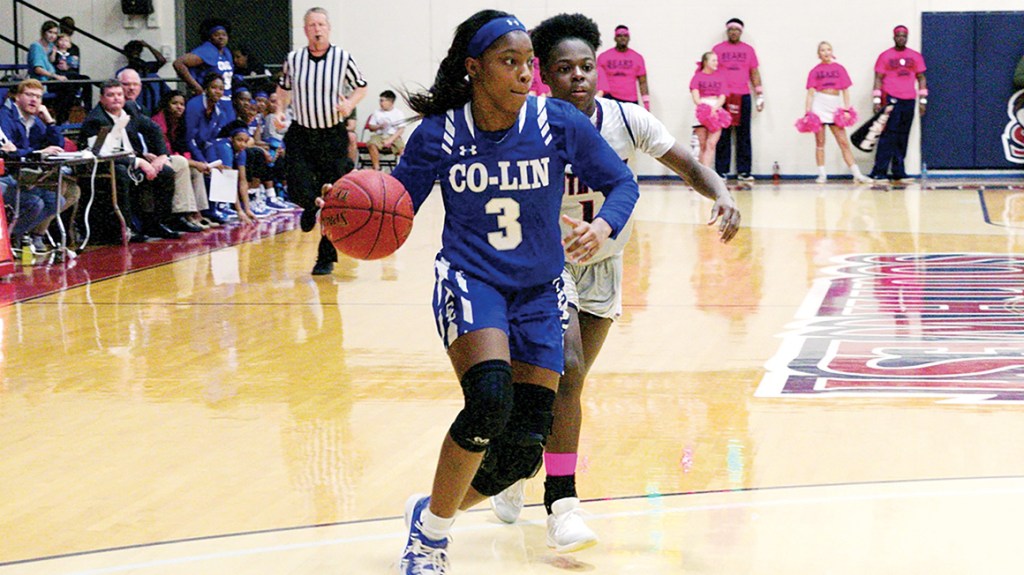 Photo by Co-Lin Sports Information Freshman forward Sha’Quandra Carter scored 10 points and grabbed three rebounds for the Copiah-Lincoln Lady Wolves on Thursday night in their loss at Jones. The Lady Wolves next play on Monday at 3 p.m. against East Mississippi in the MACJC State Tournament at Jones.

The Copiah-Lincoln Community College Lady Wolves dropped their final regular season game of the 2018-2019 year to No. 13 Jones College on Thursday, 81-60.

The loss moves Co-Lin to 18-5, 9-5 on the year and moves Jones College to 21-2, 13-1. There is a four-way tie for second place in the MACJC South Division, but with Co-Lin’s sweep over East Central, the Lady Wolves are seeded at No. 2. The MACJC State Tournament begins Monday at Jones, and the Lady Wolves will face the No. 3 team from the north, East Mississippi. Game time is set for 3 p.m. Fans can listen to the game live at colinathletics.com.

“We had several careless turnovers and just couldn’t get back on defense,” said head coach Gwyn Young. “We rebounded the ball pretty good, but I caught us standing around a little bit.”

The Lady Bobcats bounced back in the second and outscored the Lady Wolves 24 to 14. The scoring started with a Jones College 8-1 run that put them up by six, 22-16. That lead grew throughout the quarter and stretched to 11, 33-22, with 3:29 left in the half. The Lady Wolves cut that lead down to nine, 38-29, going into halftime.

Jones grew the lead back to double-digits in the third quarter with impressive three-point shooting from Keyara Jones, but Co-Lin continued to battle on the other end of the floor. Going into the final 10 minutes of play, Co-Lin trailed 57-45.

The Lady Bobcats maintained that lead for the final 10 minutes to secure the 81-60 win.

TaMara Riley led Co-Lin with 16 points, as she played very hard under the rim. Riley finished 6-of-7 from the floor. Sha’Quandra Carter posted 10 points, while Camryn Davis and T’Kyra Hicks scored seven. Magee came off the bench to score eight. Hicks led Co-Lin on the glass with seven rebounds.