Brookhaven’s downtown gets Jazzed Up for Mardi Gras 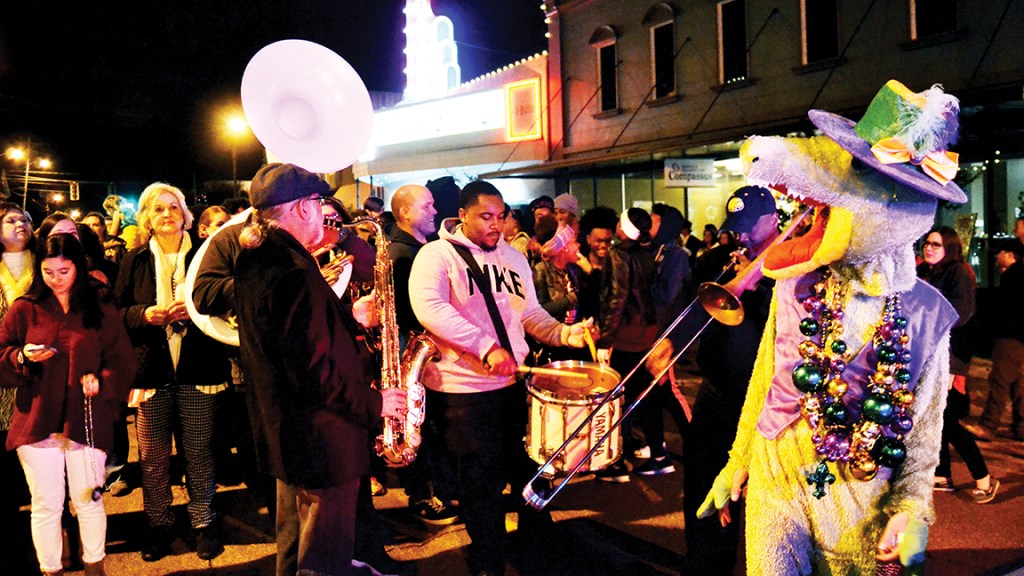 Photo by Donna Campbell A jazz band leads the second line parade through downtown Brookhaven in the first Downtown Jazzed Up event in 2017.

Katie Nations is hoping the only thing raining on her parade Saturday is beads.
She wants dry weather for the third annual Downtown Jazzed Up Second Line Parade, which will begin at Lampton Auditorium about 6:30 p.m.
Unlike a regular parade with floats, a “second line” parade is a procession that grows as bystanders join in. A jazz band with horns and drums will lead the parade.
“We have tons of beads, a couple hundred Frisbees to throw, cups, koozies and stuffed animals,” said Nations, program director for the Brookhaven-Lincoln County Chamber of Commerce, which sponsors the event with the creative economy committee, part of the Brookhaven Tourism Council.
The National Weather Service is forecasting a 40 percent chance of scattered showers for the area. Meteorologist Anna Wolverton suggests parade-goers plan to stay dry but bring an umbrella just in case.
“You’ve just got to be prepared to get a little wet,” she said.
About 150 to 200 people attended last year’s event, despite a downpour which forced the parade and musicians into Lampton Auditorium.
The parade will make its way down Cherokee Street to Railroad Street, where it will disband for a street dance. The Bridge Band will perform. The public is invited to bring lawn chairs to enjoy the show.
Since the Goin’ To Town Car Show will be downtown until about 3 p.m., some activities with Downtown Jazzed Up will begin earlier in the day.
Children are invited to visit Lincoln County Public Library from noon to 4 p.m. to decorate a mask for the Second Line parade.
Inflatables will go up about 4 p.m. if it’s not raining. They’ll be available until 7 p.m. There will be a face-painting booth set up, too.
A decoration station can be found near the U.S. post office for bikes, scooters, golf carts and wagons, which are allowed to participate in the parade.
A “Mardi Gras Mambo” is open from 4-6 p.m. at First Bank and Goto Specialty Therapy and beignet and coffee is up for grabs at Brookhaven Law from 4-6 p.m. also.
All activities are free to the public.
“We encourage people to come early, shop in the stores and take your family to eat,” Nations said. “It’s another way to showcase our beautiful downtown area and kick off spring.”