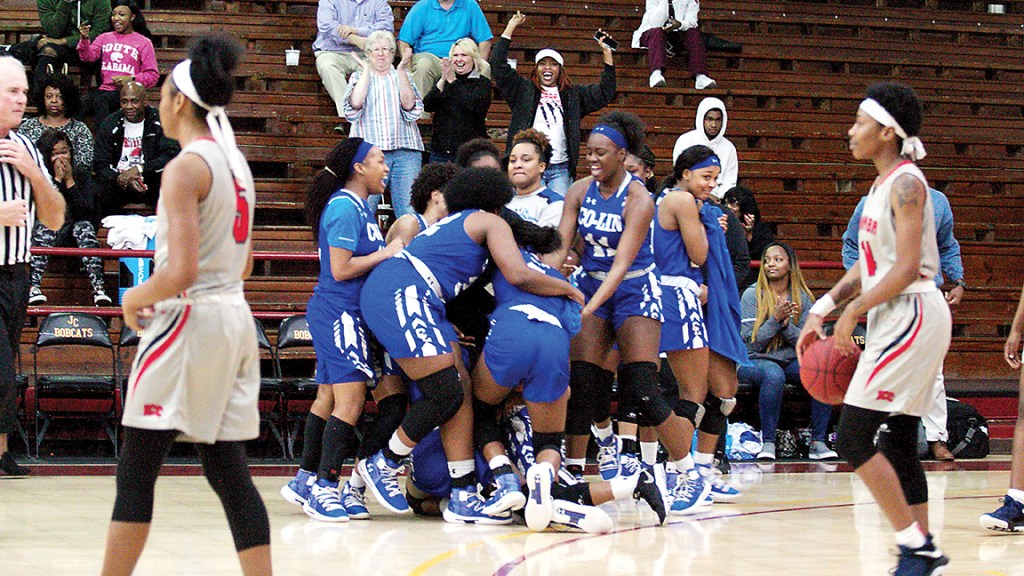 Photo by Co-Lin Sports Information Co-Lin players celebrate their 57-55 buzzer beating win over Itawamba on Wednesday in the MACJC State Tournament. Freshman forward Camryn Davis (Lawrence County) put up the offensive rebound put-back just before the final horn to send C-L to the championship game where they’ll play the winner of Jones and Gulf Coast.

The Copiah-Lincoln Community College Lady Wolves advanced to the MACJC State Championship with a thrilling 57-55 win over Itawamba Wednesday. Co-Lin’s Camryn Davis hit a put-back layup at the buzzer to earn the victory.
The Lady Wolves will face the winner of No. 13 Jones College and Mississippi Gulf Coast today at 5:30 p.m. for the state championship. A win will be the Lady Wolves’ 21st MACJC State Title.
Fans can listen to the game live on colinathletics.com.
Co-Lin dominated the contest early in the first as they grew a quick lead to 15-6 over the opening seven minutes of play. T’Kyra Hicks led that offensive effort with seven points in the seven-minute span. Itawamba chipped their way back into the game over the final three minutes of play as the Lady Indians rattled off an 8-0 run to cut Co-Lin’s lead to just one, 15-14, going into the second quarter.
Turnovers plagued the Lady Wolves in the second quarter as Co-Lin racked up 11. Co-Lin’s impressive shooting that shined in the first also slowed. Itawamba got into a steady offensive rhythm midway through the period to outpace the Lady Wolves on another 8-0 run. The scoring spurt gave Itawamba their first lead since the opening minutes 25-19. Despite the offensive woes, Co-Lin managed to limit the damage and trailed by just two, 27-25, going into the locker rooms.
Co-Lin was firing in the early minutes of the third quarter as the Lady Wolves opened on a 6-0 run that lasted nearly five minutes. The run put Co-Lin up 31-27 and was made possible by controlling the glass and limiting turnovers on the offensive end. Co-Lin continued the dominating effort for the remainder of the third and capped off the thrilling 10 minutes with a buzzer-beater layup from Alexandria Patton. The Lady Wolves outscored the Lady Indians 19-5 and took a 44-32 lead into the fourth.
Itawamba refused to go down easily in the fourth as the Lady Indians once again began to battle their way back into the ball game. ICC went on an 8-4 run over the final four minutes of play to tie the game 55-55 with just 41 seconds remaining in the game. Itawamba had possession in the final twenty seconds, but a traveling violation gave Co-Lin the ball with just 2.9 seconds remaining on the clock. The Lady Wolves advanced the ball to half court on a time out and drew an inbound play. Sha’Quandra Carter’s shot rimmed out, but Camryn Davis was on the glass for the putback as time expired to secure the 57-55 victory.
Hicks led Co-Lin in scoring with 21 points after shooting 8-of-8 from the free throw line. Darien Tubby added 12, while Davis finished with a double-double, 11 points and 11 rebounds. Carter finished with eight boards, while Tubby had seven.
Shaniyah Buford led Itawamba in the scoring column with 11 points, while Tabreea Gandy and Kealy Wilson added 10 each. Gandy finished with a double-double as she brought down 11 rebounds to lead the Lady Indians.
Co-Lin shot 31 percent (17-of-55) from the floor, 30 percent (3-of-10) from three-point range, and 72 percent (20-of-28) from the free throw line. The Lady Indians shot 31 percent (20-of-64) from the floor, 11 percent (2-of-19) from downtown, and 77 percent (13-of-17) from the stripe. Co-Lin outrebounded Itawamba 47 to 43.