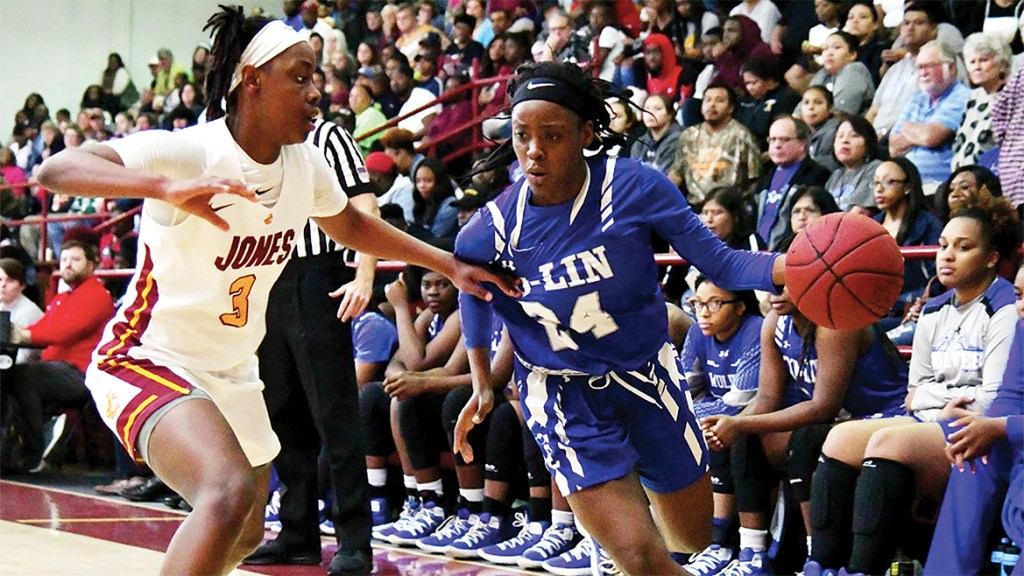 Photo by jucoweekly.com Copiah-Lincoln guard T’Kyra Hicks puts the ball on the floor against the defense of Jones College defender Destiny Haymer on Thursday in the MACJC State Tournament finals. The Lady Wolves next play on Tuesday at 1 p.m. in the NJCAA Region XXIII Tournament at Mississippi College.

The Copiah-Lincoln Community College Lady Wolves overcame a 13-point, fourth quarter deficit on Thursday but fell to No. 13 Jones College, 58-52, in the MACJC Championship.

The loss drops the Lady Wolves to 20-6 on the year but does not end Co-Lin’s season as the Lady Wolves will play as the No. 2 seed in the NJCAA Region XXIII Tournament next week on the campus of Mississippi College in Clinton. Co-Lin will be in action on Tuesday, but games times have not been delegated yet. Fans can listen to the action live on colinathletics.com.

Both high-octane offenses struggled in the opening minutes as the game was tied at 4-4 after four minutes of play. T’Kyra Hicks broke that early tie with a midrange jumper to put the Lady Wolves on top 6-4. That lead was short lived as Jones went on to outscore the Lady Wolves 10-3 down the stretch to take a 14-9 lead after one quarter.

Jones hit a big three-pointer early in the second to stretch their lead to 17-13, but Co-Lin’s Ciara Norwood responded on the next possession with a deep-ball to cut the lead to just one 17-16. After a turnover, TaMara Riley rattled home a pair of free throws to put Co-Lin back on top 18-17. Things were back and forth as the game was tied at 22-22 with 5:33 remaining in the quarter, but the Lady Bobcats closed out the quarter with a 12-5 run that lasted until the half. The offensive effort gave Jones a 34-25 lead going into the locker rooms.

The third quarter began with a lot of action as the teams scored on both ends of the floor. The Lady Wolves capitalized on a pair of technical foul free throws to cut Jones’ lead to 10, 41-31, with 5:21 remaining in the quarter. The remainder of the period was a defensive stalemate as the teams combined for just three points. With both teams scoring just eight points in the third, the Lady Bobcats took their nine-point, 42-33, lead into the fourth.

The Lady Wolves came alive in the fourth quarter and began rally back. Co-Lin fired off a 15-5 run that lasted nearly the entire quarter. Riley shined during the streak as she hit a deep three and a pair of big free throws. Co-Lin crashed the boards on the other end of the floor to limit Jones’ scoring opportunities, and to keep the effort alive. The scoring burst culminated in a long three-pointer from Hicks that gave Co-Lin a one-point, 48-47, lead with just 1:35 to play. The Lady Bobcats quickly responded with a layup followed by a steal and another easy basket to bounce back to a 51-48 lead with just 46 seconds on the clock. After a Co-Lin three-point miss the Lady Wolves resorted to fouling, but Jones knocked down the free throws late to win 58-52.

Hicks led Co-Lin in scoring with 16 points, while Carter and Riley both netted nine. Carter led Co-Lin on the boards with 10, while Camryn Davis and Darien Tubby grabbed seven.

Maya Jones led the Lady Bobcats with 15 points. Kyia Weathersby posted a double-double after scoring 14 points and bringing down a team-best 15 rebounds.