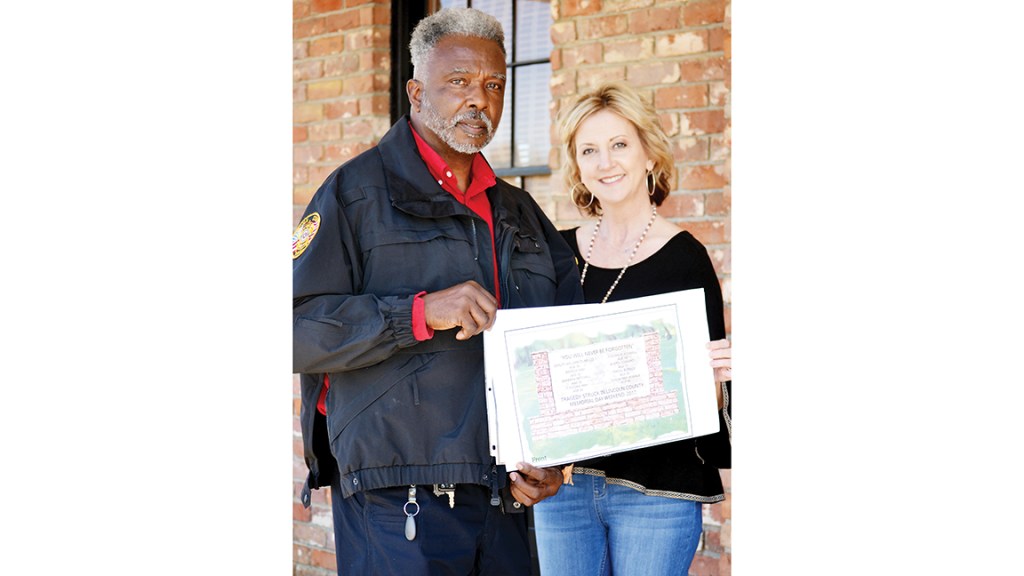 Photo by Donna Campbell Carl Brown and Marsha McCaffery, two of the many volunteers involved in the Bogue Chitto Strong fundraising event Saturday at the Bogue Chitto Attendance Center gym, hold a rendering of the memorial that will be placed at the corner of Bogue Chitto Road and Hwy. 51 in memory of the eight victims killed Memorial Day Weekend 2017 in Lincoln County.

A retired state trooper who spearheaded the first Bogue Chitto Strong event last year is rallying people together again with a mission to raise the rest of the $20,000 needed for a memorial monument to honor those killed in a mass shooting Memorial Day weekend in 2017.

“BC Strong: Triumph Over Tragedy” will be held Saturday with a welcome, speakers and music beginning at 5 p.m. Registration for a cornhole tournament begins at 1 p.m. and a live auction is at 7:30. The event, called “A Night of Unity, Hope and Inspiration,” also includes jambalaya plates for sale and a book-signing by Bogue Chitto native and author John Case. It all takes place at the Bogue Chitto Attendance Center gym.

Carl Brown, a bailiff for the Lincoln County Chancery Court, lives in Bogue Chitto, near the house where the first tragedy struck. He was kin to two of the eight people killed and knew most, if not all, of the others. He wanted to do something so the victims would not be forgotten.

The 10-foot-by-6-foot monument will include planters and inscribed granite inserts on both sides. The monument will be engraved with the words “You will never be forgotten” on the front followed by the names of victims and their ages, listed in the order they were killed. Those are: Deputy William Durr, 36; Brenda May; 52; Barbara Mitchell, 55; Toccora May, 34; Jordan Blackwell, 18; Austin Edwards, 11; Ferral Burage, 45 and Sheila May Burage, 46.

“I wanted to do something for the family,” he said. “The Lord just put that in my spirit.”

He called Bogue Chitto attorney Bobby Moak and asked if they could put a monument on a corner lot Moak owns at Bogue Chitto Road and Hwy. 51. That’s a spot where memorial crosses stand now.

Moak was all in and suggested Brown get Marsha McCaffrey involved. She quickly agreed and brought along her husband, Tate. Johnny Ray and Brenda Hall, whose daughter, Tressie Durr, was made a widow in that shooting, also joined the growing list of volunteers.

Jamie Gatlin and Reed Fernald volunteered to design the monument.

Marsha McCaffrey wanted to be a part of the group because her father, David Wallace, owned a service station in Bogue Chitto, a town that is still her home.

He retired in February 2016, then died a few months later. She was devastated and depressed. She said the praise team at her church, The Well in McComb, helped her heal.

“It’s impossible to load up all of Bogue Chitto and take them to the praise and worship team,” she said. “The Lord just laid it on my heart, ‘You can’t take Bogue Chitto to The Well, but you can bring The Well to Bogue Chitto.’”

So that’s what they’ve done and then some.

McCaffrey said she met several of the victims through the gas station, where she worked when she was a first-time mother.

“You become like family, like through my daddy’s business, Sheila May (Burage), I can’t tell you how many times she’d come in the station — my oldest child is 19 now — but when he was a baby I helped my dad,” she said. “Sheila would come in and get him to stop crying. There was just nobody like Sheila.”

The group would like to continue having these events yearly, “to keep Bogue Chitto together,” Brown said.

The money raised at the event Saturday will hopefully finish paying for the cost of the monument and installation and upkeep. Anything left over will likely be used for memorial scholarships, Brown said.

There are several ways to help:

• Register a team for the cornhole tournament for $20. Boards and bags are provided and ACL rules and scoring apply. Sign up begins at 1 p.m. Tournament is at 2 p.m. Call Dustin Porter for more information at 601-757-0239.

• Buy food at the event.

• Make donations at the event or at any Pike National Bank branch under the name “BC Strong.”

• Purchase raffle tickets for $20 each — prizes include a shotgun, handgun and rifle and a $500 Wal-Mart gift card. Tickets are available at 51 Gun and Pawn, BC Boys Café, Southern One Stop and Tressie Hall Optometry. Tickets can also be purchased through PayPal at BCStrong@yahoo.com.

• Bid in the live auction. Merchandise includes several rifles, a shotgun, a grill, an outdoor fish fryer and other items.

Brown said he was concerned about putting guns up for the raffle and live auction to raise money for a memorial dedicated to the victims of a mass shooting, so he spoke to family members first and they support it.

Brown hopes the monument lets the families of the victims know they are loved.

“For the families to see their loved ones’ names engraved and to know that the community cares enough to go to this extent to do this, I think this will be a method of healing for them,” he said.