Foundation blooms from tragedy — Warriors of the Badge 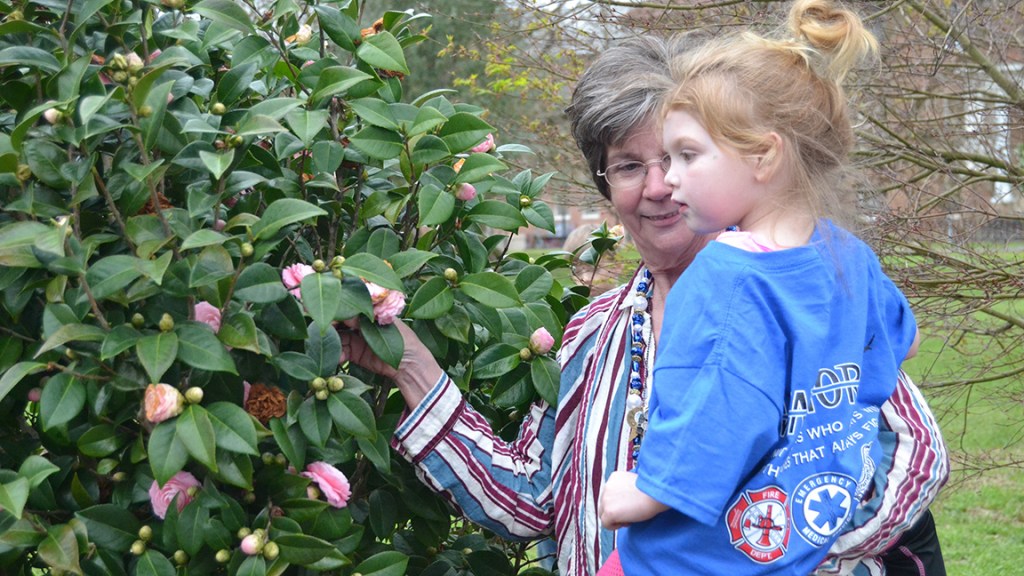 Photo by Donna Campbell Vicki Moak, the mother of fallen Brookhaven police officer Zach Moak, helps her granddaughter Avery Moak pick a camellia from a bush in front of the Lincoln County Public Library last week. Avery’s T-shirt displays the logo for the non-profit Moak has organized, Warriors of the Badge.

She’s still too young to understand what it says on the back: “Warriors are not the ones who always win, but the ones that always fight.”

Cpl. Zach Moak and patrolman James White died Sept. 29 while responding to a police call on North Sixth Street. Moak was shot as he tried to pull his wounded fellow officer to safety.

Immediately after her son’s death, Vicki Moak was comforted by the outpouring of emotional and financial support she was offered by those who knew the officers and those who didn’t.

Now she wants to lead the charge to offer that support to others who may find themselves in her shoes.

She organized Warriors of the Badge to raise funds that will be distributed, with board approval, to the families of law enforcement officers, firefighters and emergency medical services personnel nationwide who are killed or critically injured in the line of duty. The organization kicks off with a prayer rally March 16 at 6 p.m. at Lincoln Civic Center.

From 6 to 7 p.m. people can purchase raffle tickets and order T-shirts. The prayer rally is 7 to 8 p.m. Those gathered will pray for the foundation, fallen officers and the community.

“When an officer is killed in the line of duty, or critically injured, we’re going to provide aid for that family during that time,” Moak said.

The goal of the non-profit organization is to help a family until they can go through the process to receive benefits.

“We’re wanting to let that family know that when they get that check that maybe for a month or so they won’t have to worry, because they’re losing a paycheck,” she said.

The name of the organization came from something Police Chief Kenneth Collins said during the funeral services for Moak and White.

“All that kept coming to my head was every time Kenny would talk, he’d say ‘We are warriors,’” she said.

She chose to include firefighters and emergency medical services because of a suggestion from Pastor Phillip Sterling.

“They never know what they’re walking into, and sometimes they work hand-in-hand with law enforcement,” she said. “We don’t stop and think what all they do for us.”

Moak wanted to organize a similar foundation after Lincoln County Sheriff’s deputy William Durr was killed in the line of duty in 2017. But God told her to wait.

“He said, ‘No, not right now,’” she said. “I didn’t think he was saving it for this time. After Zach died, I kind of put it in the back of my head but I could feel it so strong to get up and do something.”

It was January when she started planning.

They’re selling two styles of T-shirts promoting Warriors of the Badge and raffle tickets for a turkey hunting set-up kit with a Winchester 12-gauge shotgun, turkey calls and decoys and also a $2,500 Visa card, both to be given away March 30.

She’d also like to see the foundation sponsor community “Warrior” adoptions of law enforcement officers, firefighters and emergency medical personnel by gathering to pray at their stations, take them snacks and volunteer to purchase needed items that aren’t in the budget like stuffed animals to give away to young children they encounter at emergency calls.

“If we could just get everybody to let them know we’re honoring these that are gone but we haven’t forgotten these that are left,” she said. “We want to remember these left behind.”

Moak said she has been comforted by the community in so many ways in the past six months. Zach Moak would have supported this project and be proud of his mother for her strength.

She gets that from him.