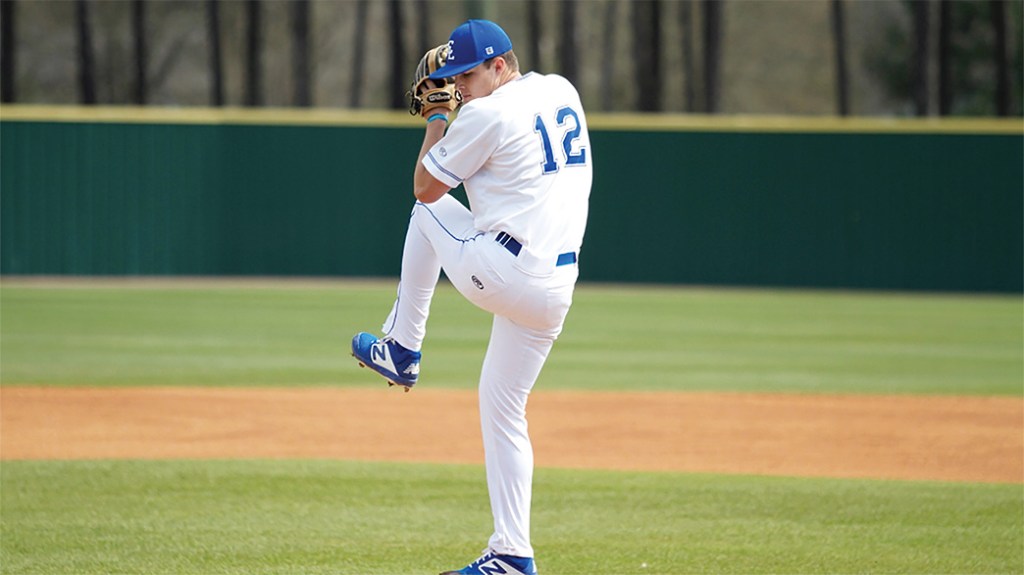 Photo by Co-Lin Sports Information Co-Lin red-shirt freshman Konner Allen (Loyd Star) sets to deliver a pitch against Highland. Allen went 2-of-3 with an RBI in a 12-7 win. In an 11-1 win he pitched five innings and gave up one earned run on three hits.

The wins moved the Wolves to 7-2 on the year.

Co-Lin raked four runs in the bottom of the third to get the scoring started on Saturday. Joshua Day dove in two runs with a triple to left field to put the Wolves on top before Ryan Zimmerman ripped an RBI single to stretch the lead to 3-0. Mark Hubbard followed with a ground out that scored Zimmerman to grow the lead to 4-0 through three innings.

The Cougars scratched one across in the top of the fourth, but Wolves got another three in the bottom half of the frame. A sacrifice fly from Austin Tidwell and a hit batter with the bases loaded scored two. Hubbard followed with an RBI single to pull the lead to 7-1 going into the fifth.

Konner Allen forced three-up-three-down from the mound in the top of the fifth to put the Wolves back at the plate. RBI singles from Justin Johnson and Tidwell plated two players, while an error scored another. With the bases loaded Zimmerman drew a walk to score Thomas Slagle to earn the Wolves an 11-1 run-rule victory.

Allen got the win on the bump as went the distance in the five-inning contest. He surrendered one run on three hits over five innings, striking out ten and walking one.

Day and Brooks Italiano led the Wolves at the plate with two hits each while Hubbard, Zimmerman, Tidwell, and Day all posted two RBIs.

The Wolves kept up the intensity at the dish in game two as Day cranked a two-run homer after Tidwell drew a leadoff walk to start the bottom of the second. Clint Stephens drove in another later in the frame with an RBI single and Allen drew a bases-loaded walk to put Co-Lin on top 4-0 early.

Co-Lin had another big inning in the third as three straight singles loaded the bases for Thomas Slagle. Slagle ripped a ground ball down the third base for a bases-clearing double that grew the Wolves’ lead to 7-0.

Brandon Brown earned the victory on the mound for the Wolves. He allowed two hits and three runs over four innings, striking out seven and walking one. A number of pitchers entered the game as relief including Lane Hanna, Jay Smith, Tucker Jones, and Zach Smith all securing outs and ultimately the victory.