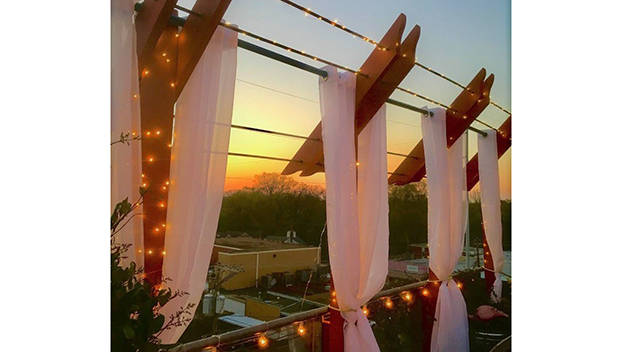 Get outside this weekend, make hard decisions and get excited about gardening

Landscape gardening sometimes involves hard decisions where no solution seems just right. But “between a rock and a hard place” dissonance can be resolved by going in an entirely different direction.

But because of the rapidly-spreading new bark scale that’s making crape myrtles unsuitable for most gardens, I’m going proactive by getting rid of the trees. I don’t see much use in going down the expensive and probably vain route of plying their roots every single spring with gallons of harsh systemic poisons. Having already invested years and special pruning attention on them, I’m pulling their plug. Not going to waste any more time or effort.

It’s a sad situation— you can find out the details and photos at felderrushing.blog—but I’m cutting my losses, moving on with replacements.

Trouble is, big hedge plants are expensive, and smaller ones take forever. So I’m trying a different tack: Going vertical and jungle-lush with closely-spaced vine-covered posts.

I’m following the lead of a dear friend who just had a tight row of posts installed along the precipitous railing edge of her enchanting rooftop patio garden perched five stories above a busy thoroughfare in Jackson’s hip Fondren neighborhood. She needed to blunt the view of a new high-rise hotel across the street, but didn’t want to take up valuable space with an expensive, cumbersome square or rectangular arbor.

So she created a narrow promenade of 8-foot posts, each sandwiched at the top with a taller pair of 4-foot arms pointing skyward at 45-degree angles. But instead of connecting the posts with rafters like a regular arbor, she ran half-inch metal “rebar” rods through holes drilled in the cross pieces creating a sturdy, closely spaced clothesline effect. Which coincidentally also made the power lines across the street disappear.

I posited that she coulda just put up a clothesline, but she shot that down quickly.

Her airy row of faux trees will soon cascade with vines; meanwhile, they’re festooned with twinkly lights and swathed in billowy curtains for posh privacy on demand. Best thing was, the materials for each post cost about forty bucks – a lot cheaper than for similar size trees.

This is a good idea for folks with narrow or zero lot line property, or precious little room between houses, or in need of something up close without having to build a solid wall. Any kind of wood cross pieces, lattice, or even fabric can be strung between the posts, but vines are a real natural.

Some of the best evergreen vines for our area, with or without flowers, include confederate or star jasmine, honeysuckle, and native Carolina jessamine sometimes called “yellow jasmine” and cross vine (love the very floriferous one called Tangerine Beauty). Deciduous vines include climbing roses, wisteria, smilax, and trumpet creeper; I would avoid muscadine vines because they need heavy pruning and the fruits attract yellow jackets and other wasps in the late summer. But a smaller clematis or really exotic gloriosa lily can be added for summer flowers.

The first year or two, until my slower-growing permanent vines get established, I am going with a mixture of fast-growing annual vines including gourds, hyacinth bean, blackeyed Susan vine, and cypress vine. Should be a lot of butterflies and hummingbirds around!

To be honest, in all this planning excitement I have nearly forgotten my sorely-missed crape myrtles.

Felder Rushing is a Mississippi author, columnist, and host of the “Gestalt Gardener” on MPB Think Radio. Email gardening questions to rushingfelder@yahoo.com.