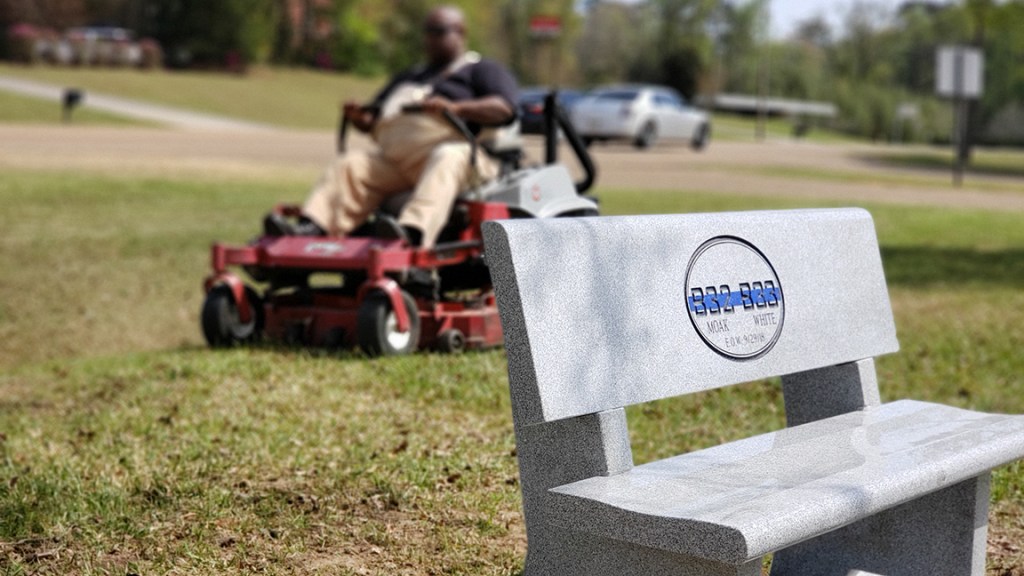 Photo by Donna Campbell Brookhaven Police Chief Kenneth Collins cuts the grass at the station Thursday to spruce up the area for the newly-installed memorial bench donated by Brookhaven Monument to honor fallen officers Zach Moak and James White.

Workers from Brookhaven Monument hoisted heavy granite slabs from a flatbed truck Thursday and planted them in the shade of an oak tree.

That’s where Dave Pace hopes they’ll be a reminder of the sacrifice of two young men who wore the blue of the Brookhaven Police Department.

Cpl. Zach Moak and patrolman James White died Sept. 29 while responding to a police call on North Sixth Street. Moak was shot as he tried to pull his wounded fellow officer to safety, police said.

The slabs were sealed together to create a memorial bench. The front of the backrest is engraved with B32 Moak and B33 White and their EOW, end-of-watch date of Sept. 29, 2018.

Pace, owner of Brookhaven Monument, wanted to create something to honor the two officers he’d never met. He knew the men’s parents and decided a memorial with a purpose would be the best choice. The bench sits facing the police station that was a home away from home for Moak and White.

“We need to honor those guys that were killed,” he said. “The families deserved it and the community needs to not forget them.”

He said the bench can be seen from Hwy. 51 and will be a lasting reminder of their bravery.

“Our police department definitely needs any kind of accolades they can get and this is our way of thanking them and showing our concern,” he said. “Every day those guys go out there and put the bullet-proof vests on and put the .9mm on their hips, they are taking their lives in their own hands. There are too many fools out there now.”

Police Chief Kenneth Collins was moved by Pace’s gesture. After Angie Lambert and the workers from the monument company made sure the bench was in place, Collins went out and brought back his lawn mower to give the grass a needed trim. He also picked up a load of red mulch to landscape the area around it.