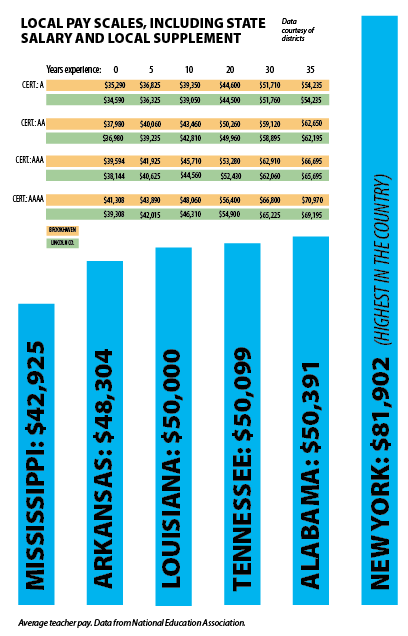 How much do teachers get paid?

Teachers’ salaries have gotten plenty of attention lately, with lawmakers voting this week to give teachers a $1,500 raise. Proposals for $4,000 in raises over two years and $1,000 over two years were considered as well.

The National Education Association, a teachers union, said Mississippi had the lowest average salary among states at $42,925 in the 2016-2017 school year. The state Department of Education says the average teacher salary was a little higher in 2017-2018.

For comparison, the average weekly wage in Mississippi is about $752, according to the Bureau of Labor Statistics. That equals $39,104 annually. In Lincoln County, it’s slightly less — $704 weekly/$36,608 annually.

But averages can be deceiving. A teacher with decades of experience will earn more than one right out of college.

Higher pay comes not only with more experience but also with a higher-level degree. A Brookhaven teacher with an “AA” certification, which requires a master’s degree, will start out making about $2,700 more than a teacher with a bachelor’s degree. Some of that is due to a higher local supplement. An “AA” teacher with 10 years experience will earn $43,460; 35 years experience or more will result in total pay of $62,520.

Lincoln County’s highest local supplement, reserved for those with “AAAA” certification and 35 years experience is $1,825. In Brookhaven, the highest supplement is $3,600.

Lawmakers settled on a $1,500 raise this legislative session, but many were unhappy.

Rep. Becky Currie, who supported the $4,000 raise over two years, said she voted in favor of the $1,500 raise because it was that amount or nothing.

“I am not satisfied and would love to give them everything they deserve,” she said Thursday. “I do want them to know that the reason I am voting for it is because they deserve a pay raise and it is going to be an up or down vote and I am not voting ‘no.’”

Sen. Sally Doty also said she wanted to give teachers a larger raise but was limited by the legislative process.

“I wanted a higher amount and voted to recommit the conference report presented to the Senate Thursday morning,” Doty, R-Brookhaven, said. “Unfortunately, that motion failed, and that was the only way at this point in the session to increase the amount.”

Facebook users responding to a post on The Daily Leader’s page also felt teachers should get more.

“Meeting the Southeastern average should be the goal to retain the best teachers,” Janie West wrote.

“You better believe they need one,” Leisa Gill wrote about a teacher raise. “Mississippi is a few short years away from a critical teacher shortage. More retiring, young ones not going into the education system (for obvious reasons), and the ones in the middle are looking to get out. The state better be concerned about this.”

“By paying a fair and competitive salary, Mississippi will be able to attract and retain quality teachers,” Pete Griffin wrote. “This is the first step in providing a quality education and increasing the not only the overall standard of the state, but in students’ lives as well. Along with a raise in salary, teachers should have other incentives, such as tax breaks on state income tax as well as property tax if they live and teach in the same city/county. Teachers often pay for supplies out of pocket. A tax credit would help to offset that cost.”

Some lawmakers argued that the state could not afford to give teachers more. Senate Appropriations Committee Chairman Buck Clarke, a Republican from Hollandale, told senators that giving a larger raise to teachers would mean reducing spending for other state services.

“What would you be willing to cut, because there is nothing left out on the table,” Clarke said. “Everything has been spent, I can assure you.”

Doty had warned earlier in the week that funding for a larger raise would be an issue.

“Every $500 increase to that raise is a $25 million hit to the budget,” she said. “We have limited funds. We can’t just print that money in the basement.”