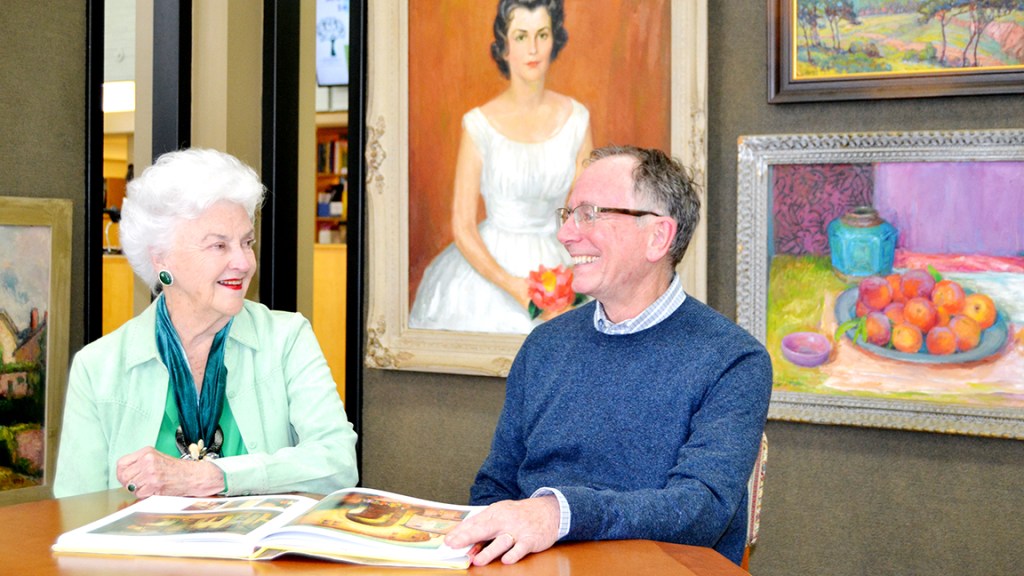 Photo by Donna Campbell Pictured are, from left: Betty Perkins and Lincoln County Public Library Director Henry Ledet discuss tonight’s reception. The portrait behind them was painted of Perkins.

Betty Ann Perkins is living with bare walls for a while.

The library will host a gala reception Tuesday at 5:30 p.m. to present the Marie Hull painting “Portal to the City, Cordes, France,” which the Perkins family is placing in the library on indefinite loan.

Along with the 1929 oil on canvas, Perkins is sharing a few more of Hull’s works that have been hanging in her Brookhaven home.

“I have bare walls now,” she said.

But it’s worth it for Perkins, who inherited much of her collection from her mother and brother. Hull, a Summit native who died in 1980, was a relative. Perkins’ father and Hull’s husband were first cousins.

Hull’s work is in galleries and museums in Paris, New York and California. Perkins’ collection has been displayed in Jackson and New Orleans’ museums. She’s happy to have it featured at her hometown library.

“I wanted the people of Mississippi to see her work and appreciate it like I do,” she said.

A catered reception will begin at 5:30 p.m. Tuesday with guest speaker Roger Ward and music by Jessie Primer.

“We wanted to honor you so we had to do something really special,” Ledet told Perkins.

Ledet was excited at Perkins’ offer to loan “Portal to the City” to the library indefinitely and to allow them to showcase other pieces of Hull’s work for a limited time. The library is continually adding pieces to its permanent collection including pieces by sculptors Bruce Brady and Kim Sessums and artists Stephen Scott Young and Dean Mitchell.

Artwork has been purchased through grants and private donations.

“We want to be the cultural center for our town,” Ledet said.

The Hull piece will fit in nicely with the art already on display.

“I feel like we’re the luckiest people in the world, to get such quality work, that we didn’t have to pay for,” he said.

At the reception, Ward will speak about the significance of Hull’s pieces painted in 1929 in France and Spain.

Ward is the deputy director and chief curator of the Mississippi Museum of Art in Jackson. He completed his master’s and doctorate degrees at the Courtauld Institute of Art of London University in 1982.

Since then he has been a museum curator and frequently-published scholar, perhaps best known for his many articles and exhibition catalogues having to do with art in Florence and Rome during the 16th century, but he has otherwise published on a wide range of European artists from Durer to Caravaggio to Monet to American painters such as Robert Henri.

Since 1998 he has taken a special interest in the recovery and restitution of artworks confiscated from private owners during the regime of the Nazi Party in Germany, from 1933 to 1945, and has been twice employed by the Department of Homeland Security to assist in these efforts.

“At the moment he is finishing up an exhibition entitled ‘A Closer Look:  Silhouette Artists in Antebellum Mississippi’ which will open at the end of the month, and is busy with the reinstallation of the museum’s permanent collection which will make its debut shortly after Labor Day,’ Ledet said.

Primer, the chairman of performance and visual arts at Tougaloo College, will play saxophone during the reception.