Lady Wolves take No. 1 Jones College to the wire 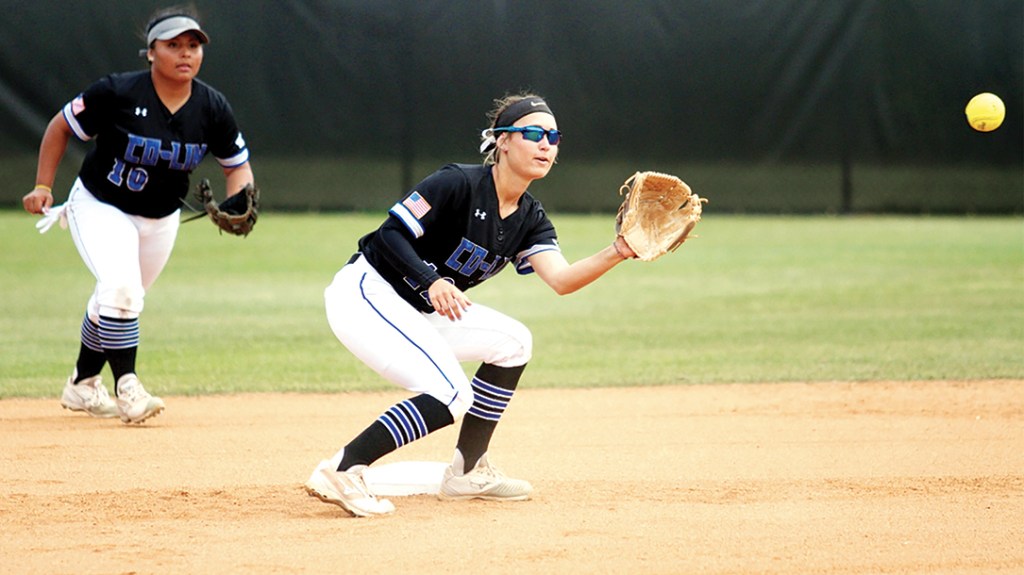 Photo by Co-Lin Sports Information Copiah-Lincoln sophomore Tori Pettit awaits a throw to second in action earlier this season. Pettit and the No. 9 Lady Wolves host No. 14 Itawamba Saturday at 1 p.m.

The No. 9 Copiah-Lincoln Community College Lady Wolves took game one of an MACJC doubleheader with No. 1 Jones College to extras Wednesday but ultimately fell in the bottom of the eighth, 5-4. The Lady Bobcats went on to win the second game of the twin bill.

The Lady Wolves were first on the board in the opener as a pitch hit Callie Fortenberry, Co-Lin’s leadoff batter. Sophomore Julie Scheuermann eventually drove Fortenberry in later in the inning with a single to right.

The Lady Bobcats grabbed the lead in the bottom of the third. A solo home run from LP Trammell followed by a run on a passed ball and an RBI double from Rebekah DiLavore put Jones College up 3-1.

Co-Lin refused to let the rally get them down as Hannah Walls responded in the top of the fourth with a leadoff solo home run to center field to bring the Lady Wolves within one, 3-2.

In the fifth, the Lady Wolves tied the game at 3-3 after Katelyn Hayman scored on a passed ball.

Co-Lin threatened in the top of the seventh as the Lady Wolves loaded the bases, but Jones got out of the jam to take the contest to extra innings.

In the extra frame, Harmoni Ashley bombed a line drive to deep right field for a solo home run to give Co-Lin the lead for the first time since the third inning, 4-3.

Co-Lin got two outs in the bottom of the eighth, but with a full count, Raven Blackwell, reached on an error as two runs crossed the plate to secure the 5-4 victory.

Kaytlon Ward took the loss for Co-Lin in the circle as she threw the entire game. She lasted seven and two-thirds innings, allowing eight hits and five runs while striking out six.

A host of Lady Wolves recorded one hit each as the team racked up seven hits, while Walls, Ashley and Scheuermann led the team with one RBI each.

Jones took an early lead in the nightcap and maintained for the remainder of the contest as the Lady Bobcats took game two 9-1 after five innings.

Co-Lin got the bats going in the top of the third as Carly Polk and Hayman led off with back-to-back singles. Marley Poole scored Hayman later in the frame on an RBI groundout to cut the lead to 5-1.

The Lady Bobcats got one more run in the third, and a three-run homer in the bottom of the fourth to grow the lead to 9-1.

Mackenzie Gros took the loss for the Lady Wolves as she surrendered nine runs on seven hits over four innings, striking out three.

Polk and Hayman led the Lady Wolves with one hit each in the second game.