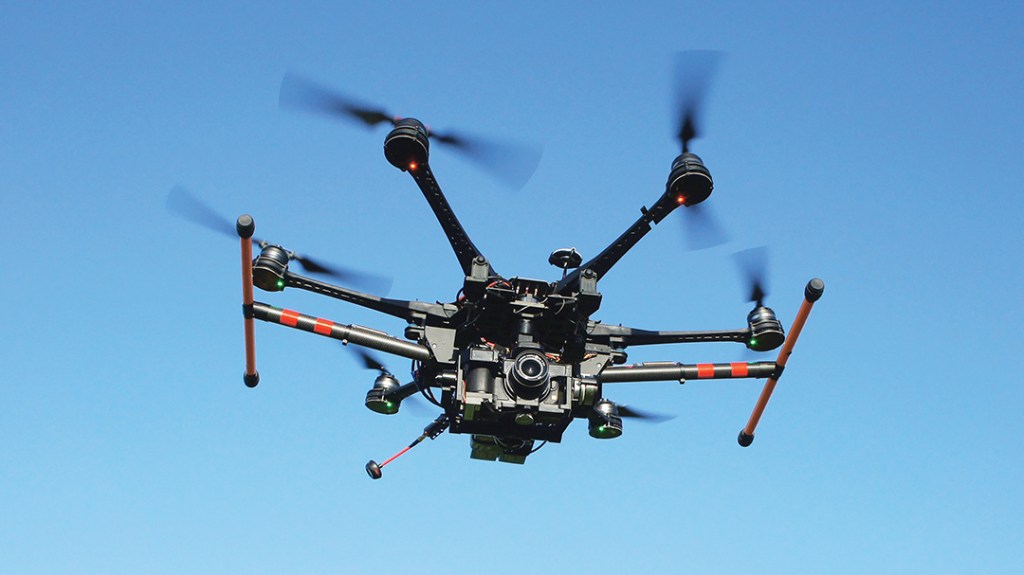 File photo Drones similar to this one are now being used at nearly 1,000 law enforcement agencies nationwide.

The Brookhaven Police Department hopes to join almost 1,000 other agencies nationwide in using an unmanned aerial system, or drone. The department announced at a Board of Aldermen meeting that it is pursuing an application with the Federal Aviation Association to implement a drone program in the city.

If approved by the FAA, the department plans to use the drone for search and rescue operations, crowd control at festivals and events, and to assist with criminal investigations. The drone is equipped with FLIR — forward looking infrared — that will allow it to see heat sources like people.

The technology has been successfully used in search and rescue operations, and to aid in locating suspects. Firefighters use the technology to “see” through smoke when responding to fires.

The police department plans to create drone policies and procedures to present to the Board of Aldermen for approval. What those might look like is unknown.

Sgt. Jonathan Alford, who is currently the only officer with a license to fly a drone, said the department could not “divulge any information regarding the Brookhaven Police Department’s UAS Program, its implementation, or operations of the UAS.”

It is unclear why the department will not provide information about the drone program after discussing it publicly at a Board of Aldermen meeting. Alford referred all questions to the FAA’s Law Enforcement Assistance Program.

“Many, if not most, law enforcement agencies in Mississippi either have or plan to acquire a drone for department use,” he said. “I train many of them for their Remote Pilot Certificate exam (commercial drone pilot license).”

As drones have become more common, laws that regulate them have as well. For law enforcement, those laws typically involve privacy issues.

If drones can fly above residences while searching for a suspect, there might be privacy concerns. It’s why some states require law enforcement to obtain warrants before using the technology.  Mississippi does not have a law that regulates use of drones by law enforcement.

Sen. Sally Doty, a Brookhaven Republican, said as the use of drones by law enforcement increases, “I would expect to have a discussion in the Legislature about privacy concerns.”

“When a citizen has a reasonable expectation of privacy a warrant most certainly is required,” she said.

Rep. Becky Currie said citizens have no expectation of privacy outdoors in a public place, so use a drone there would not be problematic.

“The new world of drones causes some tension,” Currie said about privacy concerns. “I’m not at all sure that society, or the law, has sorted through this yet. With new technology usually comes new laws but I trust our law enforcement to do the right thing. They need tools to catch the bad guys.”

“These are great tools to use but they can be abused and we want to make sure that they’re being used for the purpose intended,” city attorney Joe Fernald said. “This is a new area of the law so we want to make sure whatever you do you do right so you can use it in court.”

In some states, drone laws already exist. Florida requires a search warrant if police intend to use a drone in a way that violates privacy. Maine, California, North Dakota, Virginia, Indiana, Utah and other states also have laws that govern how law enforcement use drones. Virginia lawmakers recently killed a bill that would have allowed police to delay disclosing a search warrant authorizing drone surveillance for up to 10 days.

Indiana law requires police to get a search warrant before using a drone, unless it is an emergency situation. Agencies have interpreted that to mean a warrant is not needed to search for a suspect, since it constitutes an emergency. Mississippi’s only law regarding drones is for private use and does not address use by law enforcement.

The Supreme Court has not addressed drones specifically but decided that law enforcement does not need a warrant to observe an individual’s property from public airspace. The case involved a helicopter.  The ACLU has argued that drones pose a serious threat to privacy.

“Drones have many beneficial uses, including in search and rescue missions, scientific research, mapping and more,” the group said. “The mere presence of these police cameras can create a chilling effect on people exercising their rights to free speech, protest and other lawful activities.”

Alford said the department’s drone can be flown legally up to 400 feet, the same rule any drone operator must follow. It can be heard up to about 150 feet. It cannot eavesdrop on conversations, and does not have the capability to record audio. It can record video and take photographs.

“If it’s flying 20 feet above your head you’ll feel the wind. It’s not stealth by any means, but if you get it up high enough you can lose the hearing of it,” he said.

It does have a speaker that will allow police to transmit messages during crowd control or to relay messages to officers in the field, Alford said.

It has a 30-minute flight time.

During a discussion about the drone at a Board of Aldermen meeting, Ward 1 Alderman Dorsey Cameron asked about using the drone in high-crime areas.

Alford said the drone can be used to find someone suspected of a crime.

“If you have somebody that’s hiding from the police, we can put it up, but we’re not going to just use it every time we’re looking for a bad guy,” he said.

Police Chief Kenneth Collins said the unmanned aircraft would be available for other departments to use.

“If we have the technology and somebody needs it, if we can help them, that’s what it’s for,” Collins said.