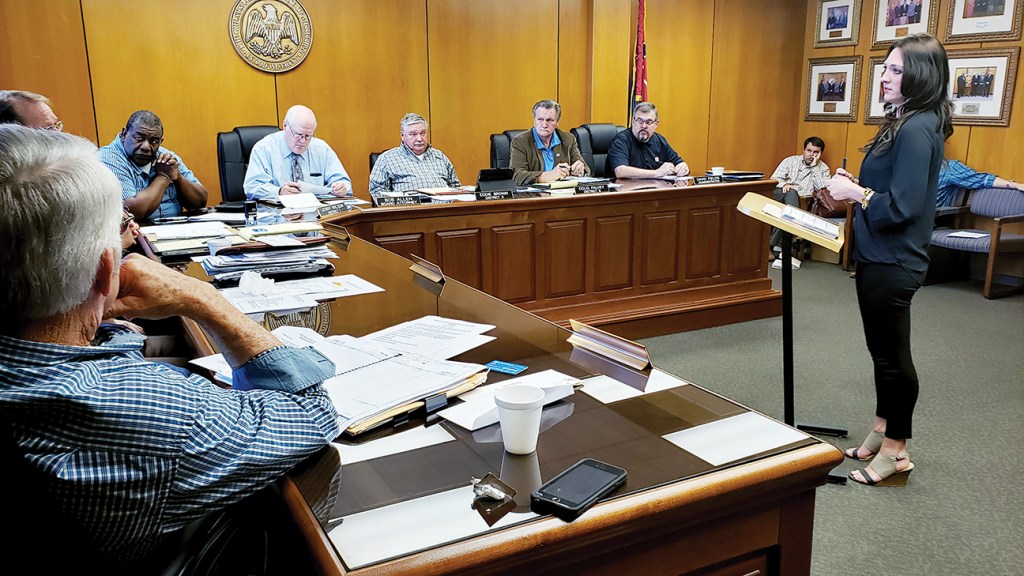 Photo by Donna Campbell Caroline Hearnsberger of The Retail Coach updates the Lincoln County Board of Supervisors Monday.

The Retail Coach and the Lincoln County Board of Supervisors traded good news Monday.

Caroline Hearnsberger, a consultant with the national retail recruitment firm, said a McAlister’s Deli franchisee has confirmed the sandwich and salad restaurant will be coming to Brookhaven. She did not know a date for a groundbreaking and could not confirm a location.

In return, the supervisors voted unanimously — after a one-hour executive session — to spend $10,000 for a third year to contract with the firm.

The Brookhaven Board of Aldermen will vote on its renewal tonight and will likely approve a third year as well at a cost of $10,000 to the city.

Despite the recruitment firm’s contract expiring recently, they’ve still been working on the county’s behalf to “recruit retail to the City of Brookhaven,” Hearnsberger said.

She said they’ve made some progress in the two years.

“I think that we’ve had some wins that have come into Brookhaven,” she said. “We’re still waiting for Smoothie King to finish its building and open its doors. That’s another one we’ve actively recruited and got here.”

Before the contract vote, District 4 Supervisor Eddie Brown asked for a progress report from Hearnsberger.

“What business have you brought in here? How many employees? Tell me something right now that is going to encourage me to vote for you,” he said.

She took credit for Zaxby’s, a chicken restaurant that is owned by a Brookhaven franchisee. It opened recently on Brookway Boulevard.

“We definitely brought a Zaxby’s in. We brought a Smoothie King in. We’re working on this grocery store issue. There are several businesses that are looking at locations around the interstate,” she said.

An owner of the Zaxby’s franchise, however, said the Retail Coach had zero involvement with bringing the restaurant chain to Brookhaven.

Hearnsberger planned to meet with property owners Monday and today.

“I’ve got some bigger businesses that would love to come into the city, but we’ve got to get these property owners to realize that they can’t sell their land at the price that you would put it in Jackson, Mississippi, for example,” she said.

Board President Jerry Wilson, District 1 supervisor, said he sees a few stores like Dollar General in the rural area and wants to see the county talked up as much as the city for retail development.

The board wants Chancery Clerk Tillmon Bishop to be the point of contact for Hearnsberger and they want to be kept informed. That’s been a problem in the first two years of the contract.

“We never hear from you. It’s just like a distant love,” he said.

She said one of her main focuses will be “finishing up some of what we hope will happen soon with the Piggly Wiggly (stores), with the grocery stores.”

She’s also working already to fill the space that will be left vacant downtown when Fred’s closes.